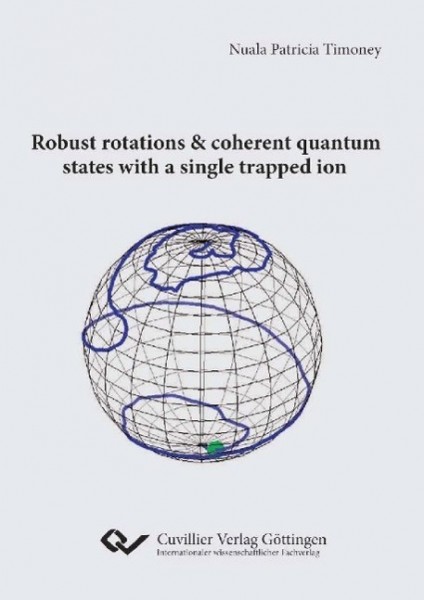 Coherent operations necessary for the implementation of single and multi-qubit quantum gates with trapped ions, that are robust against variations in experimental parameters and intrinsically indeterministic system parameters, are demonstrated. In particular, single qubit gates developed using optimal control theory are demonstrated for the ?rst time with trapped ions. Their performance as a function of error parameters is systematically investigated and compared to composite pulses.A two level quantum mechanical system is realized on the S1/2 F = 0 ? S1/2 F= 1 mF = 0 transition in 171Yb+ con?ned in a Paul trap, driven by microwave radiation close to 12.6 GHz. Shaped pulses and composite pulses have been realized that are speci?cally designed to tackle o?-resonance errors, timing errors or power variations of the driving ?eld. Good agreement is seen between the simulated results and measured ones. Higher experimental ?delities are obtained with the aforementioned shaped and composite pulses over an extended parameter regime than with a simple pulse.The experiments have baselines as low as 76 %. The suspected culprit of this result is the preparation procedure. To this end the preparation process was changed to be faster (0.5 ms) and more e?cient (97 %). The essential role of e?ective preselection of the data is highlighted whilst investigating unwanted optical pumping e?ects.Coherence time is an important property of a quantum computer. A weakness of an ion trap quantum computer is its potential dependence on magnetic ?eld sensitive levels. Ambient magnetic ?eld noise is the cause of the shorter coherence times of magnetic ?eld sensitive levels (5 ms) compared to their ?eld insensitive counterparts (500 ms) as observed in 171Yb+.At an avoided crossing the energy separation of a dressed state should be robust to small changes in detuning. Using a microwave ?eld and the ground state hyper?ne levels of 171Yb+, such dressed states are prepared and Rabi oscillations are observed between them. The coherence times of systems built on this principle are measured.