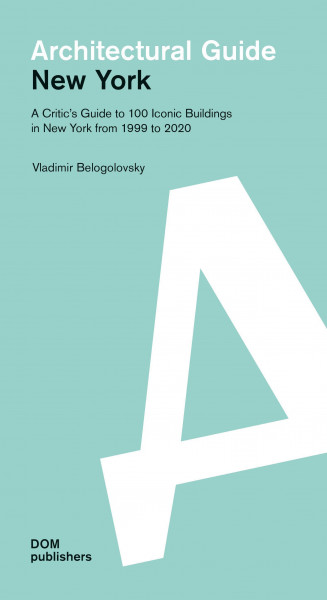 New York. Architectural Guide
A Critic's Guide to 100 Iconic Buildings in New York from 1999 to 2020

This architectural guide brings together 100 of the most original structures built in New York City since 1999. Vladimir Belogolovsky pairs them with such nicknames as Guillotine, Peacock, Shark's Fin, Turtle Shell, and Woodpecker. The New York-based author's selection covers buildings realized by the world's most renowned architects, in a period when their creations were celebrated as art, and personal styles were encouraged by the ­media, critics, and clients. The featured time span begins with the rise of the starchitect in the late 1990s, and ends in the present day. But the mission of the book is not only to document; it is also to celebrate New York's transformative ­energy. Many of the buildings were designed either by ­foreign architects or those who settled in the city and now call it home. Through witty, incisive commentary, catchy nick­names, quotes from the author's interviews with the architects, and detailed maps, this singular guide allows readers to see many of New York's con­temporary icons in a new way. von Belogolovsky, Vladimir

Vladimir Belogolovsky was born in Odessa, Ukraine in 1970. He has lived in New York City since 1989, where he graduated from The Cooper Union School of Architecture in 1996. He has collaborated with a dozen New York architectural practices, including the offices of Rafael Viñoly, David Rockwell, and Gensler. In 2008, he founded the New York-based Intercontinental Curatorial Project, which focuses on curating and designing architectural exhibitions worldwide. Belogolovsky is the American correspondent for the architectural journal SPEECH (Berlin). He runs interview columns on ­ArchDaily.com, ArchNewsNow.com, and Archi.ru, and is a corresponding member of the International Academy of Architecture in Moscow (IAAM). His books include Harry Seidler: The Exhibition (Oscar Riera Ojeda Publishers, 2017); Conversations with Peter Eisenman: The Evolution of Architectural Style (DOM, 2016); Conversations with Architects in the Age of Celebrity (DOM, 2015); Harry Seidler: LIFEWORK (Rizzoli, 2014); and Soviet Modernism: 1955-1985 (TATLIN, 2010). He has written about New York for the Great Russian Encyclopedia, and has lectured widely about New York's architecture and planning principles.