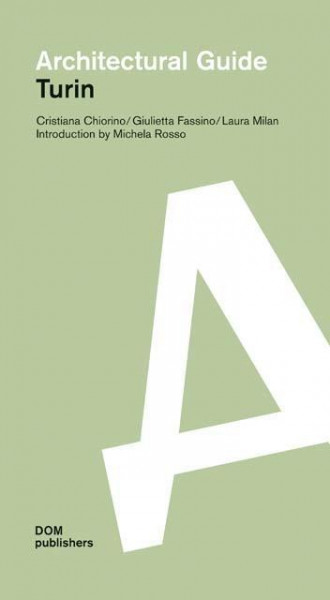 Widely known as the Italian one-­company town during the ­development of ­Fiat in the 20th century, ­Turin underwent a process of transformation roughly ­20 years ago in its search for a new ­urban identity. The city, situated at the foot of the Alps, has ­become a laboratory for the reconversion of post-industrial heritage, in part ­owing to the Winter Olympics Games that took place in 2006. Manifestations of change have left ­behind significant traces in its urban fabric. Besides its ­industrial ­history, ­Turin can also surprise with its ­baroque architecture - which has brought the city to the forefront of ­international ­popularity among architects - and with masterpieces of Italian modern ­architecture, such as works by Pier Luigi Nervi and Carlo Mollino. The structure of this guide is based upon a ­sequence of 150 ­buildings, some of which date back to 1900. These are introduced in the form of a tour that starts in the Roman centre and ­the ­baroque ­centre and heads towards the city's outskirts, ­encompassing Ivrea - the city built around the ­Olivetti - and the wineries in the Langhe ­region, recently recognised by ­UNESCO as a World Heritage Site. Pictures by Robert Albano et al. von Chiorino, Cristiana

Cristiana Chiorino, Giulietta Fassino and Laura Milan all born in Turin in 1975, architects with a PhD in History of Architecture. Since 2010 they have been partners of Studio Associato Comunicarch, a member of the international network Guiding Architects. Since 2005, Chiorino and Milan have been part of the editorial board of the monthly magazine Il Giornale dell'Architettura and have taken part in the curation of important exhibitions on architecture, including Carlo Mollino (Turin, 2006), Pier Luigi Nervi. Architecture as Challenge (Bruxelles, Rome, Turin, 2010 - 2011) and Carlo Mollino. Maniera moderna (Munich, 2011). Since 2006, Fassino has been a consultant for the Urban Center Metropolitano of Torino and is the author of several guides on Turin and its transformation process.