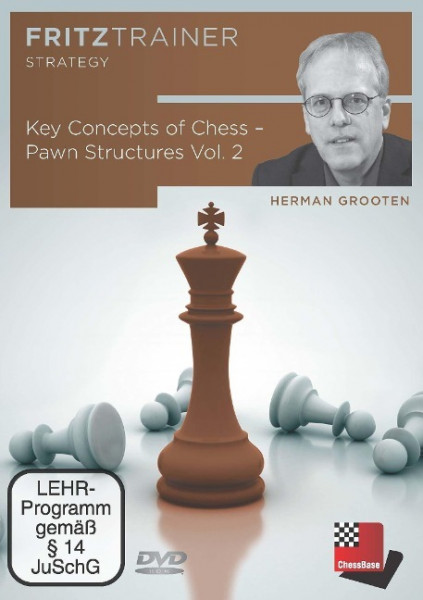 Herman Grooten: Key Concepts of Chess - Pawn Structures Vol. 2 The Isolated Queen's Pawn and The Passed Pawn A new production in the "Key Concepts of Chess" series. The idea is to focus on certain themes by means of specific pawn structures. The central question is: how can the pieces be manoeuvred into good positions and what should we then consider? IM Herman Grooten offers rules-of-thumb and concepts to give club-chess players the necessary guidance so that they can try to find the right paths in their own games. In this second part the emphasis will be on typical pawn structures that appear quite often in games, and that will be very recognizable for clubchess players. For example, on this video course the topics "the isolated queen pawn (IQP)" and "the passed-pawn in the middlegame" will be discussed in detail. Because the IQP can appear on the board in many opening variations, it is worthwhile to study. The fact that sometimes a passed-pawn can be invaluable and can cause an astonishing effect will be music to the ears of the club-chess player. . Video running time: 3 hours 40 min (English) . With interactive training including video feedback . Extra: Model Games and Training with ChessBase apps - Play key pawn structures against Fritz on various levels von Grooten, Herman

Herman Grooten is an International Master from the Netherlands, a renowned trainer with over 35 years of experience and the author of several highly acclaimed books about chess training and chess strategy.