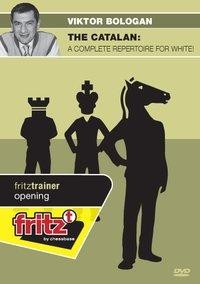 The Catalan:a complete repertoire for White!The Catalan is one of the most solid openings for White. It forms part of thelarge and strong fianchetto family in which White builds his strategy mainlyaround the bishop on g2. The current DVD covers all of Black's replies tothe Catalan, some of which can even transpose to other openings such asthe Tarrasch System and the Queen's Indian. The author's idea is, as it wasin previous DVDs he has published in this area, to help White against allclassical setups for Black. Though the DVD is aimed at players of the whitepieces, it still might be useful for those who have Black so that they will better understand the coming threats. It would make little sense to mention all the strong players who include the Catalan in their repertoire. Suffice it to say that the Catalan rules!Video running time: 5 hours 29 minutes. von Bologan, Viktor

Viktor Bologan is a pupil of the top Moldovan trainer Vecheslav Chebanenko. Formany years Bologan has been the number 1 in Moldova and has represented hiscountry in nine chess Olympiads. His greatest successes were in 2003, when he first of all won the Aeroflot Open and then the famous Dortmund Tournament, ahead of Kramnik and Anand. The Moldovan has extensive experience as a trainer and has also published his first books.