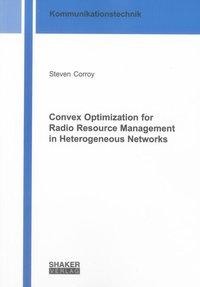 Heterogeneous networks are expected to be one of the key enablers for solving the capacity problem of modern mobile communication networks. As the demand for mobile traffic will grow exponentially in the coming years, low power base stations will be deployed to serve users in crowded areas with limited costs and system complexity. A core research challenge is to optimally operate heterogeneous networks. One of the main problems is cell association, which consists of associating users to either a macro node or a smaller low power node, e.g., a pico node. In this dissertation, the problem of finding the cell association that maximizes the sum rate in the downlink of an LTE-based network is investigated. This problem is of combinatorial nature. The theory of convex optimization is at the heart of this work. Semidefinite programming, and more specifically, modern methods of semidefinite relaxation and randomization are the key concepts that allow for solutions with low complexity. In order to highlight the effectiveness of this theory for solving combinatorial problems, the problem of noncoherent demapping for fading channels using quadrature phase-shift keying (QPSK) is considered. The randomization method is shown to outperform the classical pilot-based demapping when the channel dynamic is high. The problem of cell association in heterogeneous networks is first considered for networks consisting of one macro node and one pico node. It is demonstrated that this problem can be formulated as a binary linear fractional problem, which can be transformed into a binary quadratic fractional problem. An upper bound on the achievable sum rate is derived via semidefinite relaxation. A new practical heuristic, called dynamic range, is proposed. It is shown that this heuristic outperforms standard methods from the LTE standard and comes close to the upper bound. Furthermore, similar practical algorithms are provided to optimize cell association for more realistic network setups. In order to show the wide range of applicability of semidefinite programming for communication systems, the problem of associating users to either a base station or a relay is considered. It is demonstrated that this problem can be reformulated as a maximin binary fractional problem. Furthermore, it is shown that this problem can be transformed so that the fundamentals of the theory used for cell association can be applied. A novel heuristic is proposed. It leads to a relay association that improves the sum rate to a value close to the optimum. Finally, another problem inherent to relay networks is tackled via convex optimization. In order to transmit sparse signals over amplify-and-forward multihop relay networks, methods from compressed sensing are adapted and utilized. A new framework for modeling such networks is proposed. The optimal relaying strategy for error minimization is derived and shown to enable reconstructing sparse signals reliably. von Corroy, Steven