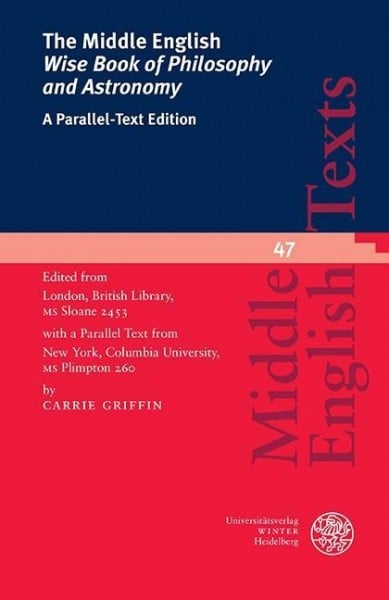 The Middle English 'Wise Book of Philosophy and Astronomy'

The 'Wise Book of Philosophy and Astronomy', surviving in thirty-four manuscripts ranging in date from c. 1380 to c. 1600, was one of the most widely-copied, consistently read, and arguably influential treatises of its kind in the vernacular in the medieval and early modern periods in Britain. This pseudo-Aristotelian text, with its roots in the 'Secreta secretorum' tradition, reveals contemporary, widely held views regarding several strands of medieval thought: philosophy, astronomy/astrology, physiognomy, 'computus', and theology. The 'Wise Book' never circulated in printed form; however, its surviving manuscript witnesses are material testament to the wide variety of readers and audiences who copied, annotated, abridged, and used the information contained in it. The variety of its material formats extends the significance of the 'Wise Book' beyond its contribution to the history of ideas; as such, the manuscripts manifest considerable variation of form, materiality, and content, and bear witness to a wide and heterogeneous public for the 'Wise Book' and its theories. This is the first edition of the text, and includes an introduction, commentary, appendices, and a glossary.