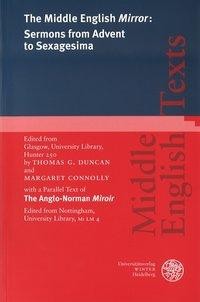 The Middle English 'Mirror': Sermons from Advent to Sexagesima

The Middle English 'Mirror': Sermons from Advent to Sexagesima
With a Parallel Text of The Anglo-Norman 'Miroir'

The ME Mirror, a fourteenth-century prose translation of the thirteenth-century AN Miroir by Robert de Gretham, is a text of cultural and linguistic value. As a cycle of sermons addressed to a lay audience, it offers extensive material for the study of popular preaching in fourteenth-century England. Four of the six surviving manuscripts exemplify that variety of fourteenth-century London language designated "Type II" by M. L. Samuels. Only brief, unedited extracts or quotations from the Mirror have hitherto appeared in print; a full critical edition will not appear for many years. This edition, based on MS Hunterian 250, Glasgow University Library, one of the "Type II" manuscripts, aims to present a sizeable sample of the Mirror including the Prologue and a representative selection of sermons with the Anglo-Norman source text given in parallel.