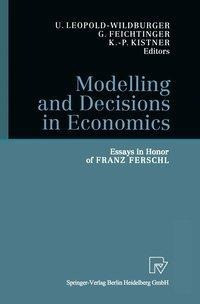 Modelling and Decisions in Economics

Modelling and Decisions in Economics
Essays in Honor of Franz Ferschl

Franz Ferschl is seventy. According to his birth certificate it is true, but it is unbelievable. Two of the three editors remembers very well the Golden Age of Operations Research at Bonn when Franz Ferschl worked together with Wilhelm Krelle, Martin Beckmann and Horst Albach. The importance of this fruitful cooperation is reflected by the fact that half of the contributors to this book were strongly influenced by Franz Ferschl and his colleagues at the University of Bonn. Clearly, Franz Ferschl left his traces at all the other places of his professional activities, in Vienna and Munich. This is demonstrated by the present volume as well. Born in 1929 in the Upper-Austrian Miihlviertel, his scientific education brought him to Vienna where he studied mathematics. In his early years he was attracted by Statistics and Operations Research. During his employment at the Osterreichische Bundeskammer fUr Gewerbliche Wirtschaft in Vienna he prepared his famous book on queueing theory and stochastic processes in economics. This work has been achieved during his scarce time left by his duties at the Bundeskammer, mostly between 6 a.m. and midnight. All those troubles were, however, soon rewarded by the chair of statistics at Bonn University. As a real Austrian, the amenities of the Rhineland could not prevent him from returning to Vienna, where he took the chair of statistics. von Leopold-Wildburger, Ulrike und Feichtinger, Gustav und Kistner, Klaus-Peter