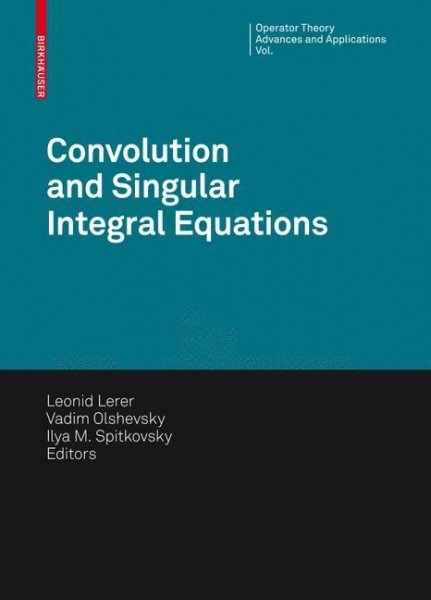 This book consists of translations into English of several pioneering papers in the areas of discrete and continuous convolution operators and on the theory of singular integral operators published originally in Russian. The papers were wr- ten more than thirty years ago, but time showed their importance and growing in?uence in pure and applied mathematics and engineering. The book is divided into two parts. The ?rst ?ve papers, written by I. Gohberg and G. Heinig, form the ?rst part. They are related to the inversion of ?nite block Toeplitz matrices and their continuous analogs (direct and inverse problems) and the theory of discrete and continuous resultants. The second part consists of eight papers by I. Gohberg and N. Krupnik. They are devoted to the theory of one dimensional singular integral operators with discontinuous co- cients on various spaces. Special attention is paid to localization theory, structure of the symbol, and equations with shifts. ThisbookgivesanEnglishspeakingreaderauniqueopportunitytogetfam- iarized with groundbreaking work on the theory of Toepliz matrices and singular integral operators which by now have become classical. In the process of the preparation of the book the translator and the editors took care of several misprints and unessential misstatements. The editors would like to thank the translator A. Karlovich for the thorough job he has done. Our work on this book was started when Israel Gohberg was still alive. We see this book as our tribute to a great mathematician. von Lerer, Leonid und Olshevsky, Vadim und Spitkovsky, Ilya M. und Karlovych, Oleksiy