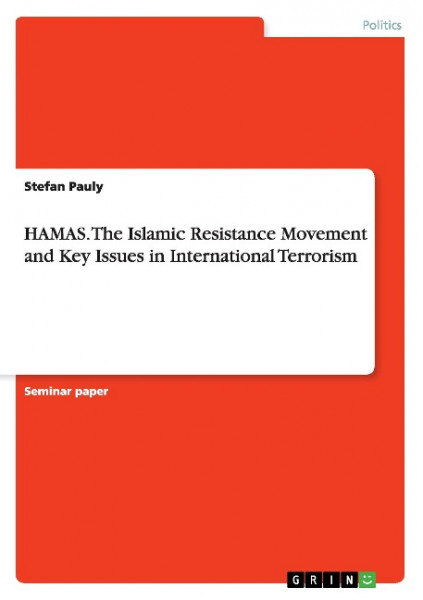 Seminar paper from the year 2011 in the subject Politics - International Politics - Topic: Peace and Conflict Studies, Security, grade: 1,5, University of St Andrews (Centre for the Study of Terrorism and Political Violence), language: English, abstract: Hamas is an acronym that stands for "Harakat al-Muqawamah al-Islamiyya", or Islamic Resistance Movement, whereas the word Hamas in itself also means "zeal" or "enthusiasm" in Arabic and, according to some sources, additionally originates from another term with the meaning of "courage and bravery". Hamas is by far the largest and perhaps also most influential militant Palestinian organization. It combines a religio-political ideology with nationalist-separatist elements. Hamas is mainly active in the Palestinian territories, and currently in control of the Gaza Strip. Its overall goal is the establishment of an Islamic state in Palestine.Written in early 2011, the paper provides a brief overview of the Islamic Resistance Movement and a retrospect of what was known about Hamas back then. A helpful quick-guide giving some of the most important names and dates in the movement's history. von Pauly, Stefan