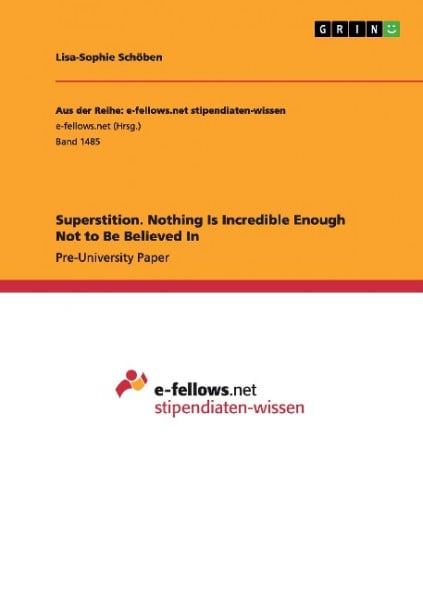 Superstition. Nothing Is Incredible Enough Not to Be Believed In

Superstition. Nothing Is Incredible Enough Not to Be Believed In

Pre-University Paper from the year 2012 in the subject English Language and Literature Studies - Other, grade: 0,7, , language: English, abstract: It is really true that superstition has already had a long tradition. Its roots can be traced back into Ancient Greece; it played an important role in antiquity and had its peak in the Middle Ages which is especially known for the witchcraft trials. Many tragedies, dramas, and poems from that period of time dealing with superstition are still popular today.By definition "superstition is a widely held but irrational belief in supernatural influences, especially as leading to good or bad luck, or a practice based on such a belief." It attributes powers to persons and things which are not nature-given.Is superstition a current matter nowadays? Which elements are still present today and how far is it spread? Is there room for anything so old-fashioned, credulous, and primitive in our modern, rational time determined by reason, intellect, and sanity? Or is it just an unimportant "fashion" which recurs every now and then and is only smiled at by the majority? Does superstition have any significance other than entertaining us? What do superstitious rites include and what traditions are still exerted today? von Schöben, Lisa-Sophie