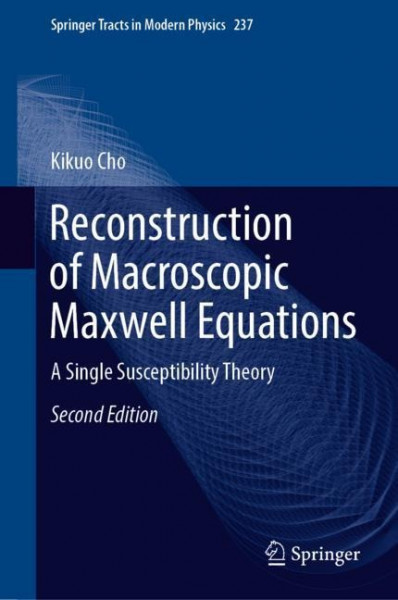 This book discusses the electromagnetic response function of matter, providing a logically more complete form of macroscopic Maxwell equations than the conventional literature. It shows that various problems inherent to the conventional macroscopic Maxwell equations are solved by the first-principles derivation presented. Applying long wavelength approximation to microscopic nonlocal response theory results in only one susceptibility tensor covering all the electric, magnetic and chiral polarizations, and the book provides its quantum mechanical expression in terms of the transition energies of matter and the lower moments of corresponding current density matrix elements. The conventional theory in terms of epsilon and mu is recovered in the absence of chirality under the condition that magnetic susceptibility is defined with respect to not H, but to B. This new edition includes discussions supporting the basis of the present electromagnetic response theory in a weakly relativistic regime, showing the gauge invariance of many-body Schroedinger equation with explicit Coulomb potential, the relationship between this theory and the emergent electromagnetism, and the choice of appropriate forms of single susceptibility theory and chiral constitutive equations. von Cho, Kikuo

Brief Biography of Kikuo Cho Prof. Dr. Kikuo Cho was born in 1940 in Japan. He got his PhD in 1970 from Tokyo University for the theoretical study of optical line shapes of alkali-halide phosphors. He was research assistant at the Institute for Solid State Physics of Tokyo University from 1966 to 1971, studying the optical properties of impurity centers and excitons in non-metallic crystals. Then he spent 5 years and a half in Europe, as visiting Professor at Stuttgart University for 1971-72, as reseach associate at the University of Strasbourg for 1972-73, and as visiting researcher at Institut fuer Festkoerperforschung in Stuttgart for 1973-76. During this period, he had strongly collaborated with experimental groups, which resulted in the book "Excitons" (Springer Verlag, Topics in Current Physics 14). In 1977 he became associate Professor of solid state theory at Osaka University and full professor in 1991. In the latter half of this period his main activity is on the construction of microscopic nonlocal response theory ("Optical Response of Nanostructures", Springer Verlag, series Solid State Science). After retirement in 2004, he became Professor Emeritus of Osaka University. In the years 2006 - 2010 he was Fellow of Toyota Physical and Chemical Research Institute, and devoted himself to the logically complete reformulation of macroscopic Maxwell equations based on his own microscopic nonlocal response theory. It resulted in the book, "Reconstruction of macroscopic Maxwell equations" (Springer Tracts in Modern Physics, 2010). Since 2015 July he is a member of the council of Toyota Physical and Chemical Research Institute.