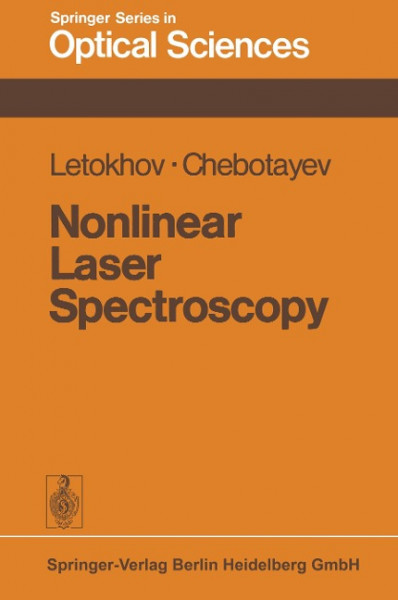 The laser as a source of coherent optical radiation has made it possible to investigate nonlinear interaction of optical radiation with atoms and mole­ cules. Its availability has given rise to new research fields, such as non­ linear optics, laser spectroscopy, laser photochemistry, that lie at the boundary between quantum electronics and physical optics, optical spectros­ copy and photochemistry, respectively. The use of coherent optical radiation in each of these fields has led to the discovery of qualitatively ne\~ effects and possibilities; in particular, some rather subtle effects of interaction between highly monochromatic light and atoms and molecules, in optical spec­ troscopy, have formed the bases for certain methods of so-called nonlinear, laser Doppler-free spectroscopy. These methods have made it possible to in­ 5 6 crease the resolution of spectroscopic studies from between 10 and 10 , lim­ 11 ited by Doppl er 1 i ne broadeni ng up, to about 10 ; at present some 1 abor­ atories are developing new techniques that have even higher resolution. The discovery and elaboration of the methods of nonlinear laser spectroscopy have resulted largely from contributions by scientists from many countries, in particular from the USA (Massachusetts Institute of Technology, Stanford Uni­ versity, National Bureau of Standards in Boulder, Harvard University, etc. ), the USSR (P. N. Levedev Institute of Physics, Institute of Semiconductor Phys­ ics in Novosibirsk, Institute of Spectroscopy, etc. von Letokhov, V. S. und Chebotayev, V. P.