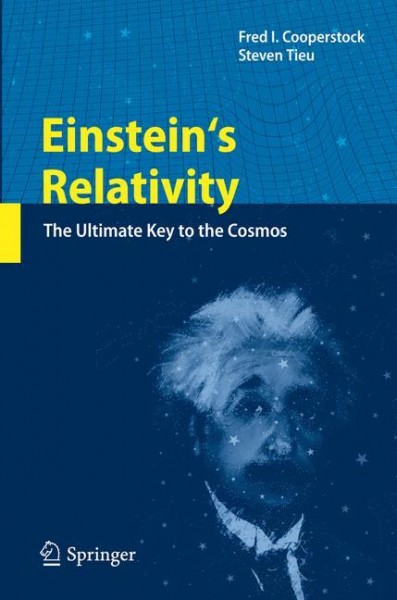 Einstein's Relativity
The Ultimate Key to the Cosmos

This richly illustrated book is unique in bringing Einstein's relativity to a higher level for the non-specialist than has ever been attempted before, using nothing more than grade-school algebra. Bondi's approach with spacetime diagrams is simplified and expanded, clarifying the famous asymmetric aging-of-twins paradox. Einstein's theory of gravity, general relativity, is simplified for the reader using spacetime diagrams. The theory is applied to important topics in physics such as gravitational waves, gravitational collapse and black holes, time machines, the relationship to the quantum world, galactic motions and cosmology. von Cooperstock, Fred I. und Tieu, Steve

Fred I Cooperstock received his BSc from the University of Manitoba, in Winnipeg, Canada and his PhD in Physics from Brown University, Providence, USA. He was a Post-Doctoral Fellow at the Dublin Institute for Advanced Studies and an Assistant, Associate and Full Professor at the University of Victoria, Canada where he is currently Professor Emeritus. He spent two years as a Canada-France Exchange Visitor at the Institut Henri Poincare, Paris and a year at the Technion-Israel Institute of Technology as a Lady Davis Fellow. As well, he was a Visiting Professor for shorter periods at various institutions. He is the author of approximately 100 publications and the recent book, "General Relativistic Dynamics". Steven Tieu received his BSc from Simon Fraser University in Burnaby, Canada in Physics. After working in the I.T. industry for a year, he returned back to academia where he received his MSc in Applied Mathematics, also from Simon Fraser University. He went on to complete his PhD in Physics at the University of Victoria in Victoria, Canada. After completing his PhD, he joined Systemware Innovation, an engineering firm, which works in the nuclear industry, the oil & gas industry and the financial industry. Recently, he joined Teradici Corporation in Vancouver, Canada as a Design Engineer to develop desktop virtualization systems.