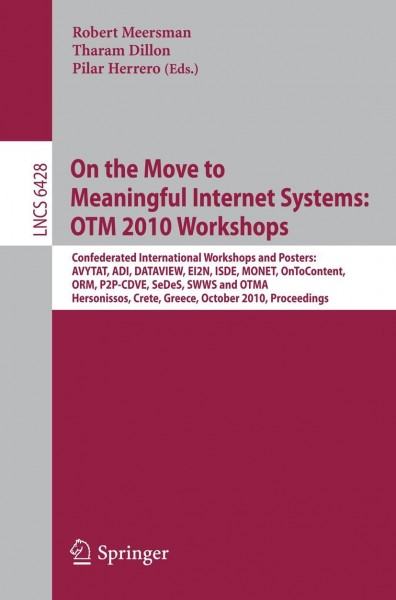 On the Move to Meaningful Internet Systems: OTM 2010

and ontologies,and CoopIS(CooperativeInformationSystems,since 1993),c- ering the application of these technologies in an enterprise context through, for example, work?ow systems and knowledge management. In 2007 the IS wo- shop (Information Security) was added to try covering also the speci?c issues of security in complex Internet-based information systems. Each of the main c- ferences speci?cally seeks high-quality contributions and encourages researchers to treat their respective topics within a framework that incorporates jointly (a) theory, (b) conceptual design and development, and (c) applications, in part- ular case studies and industrial solutions. Following and expanding the model created in 2003, we again solicited and selected quality workshop proposals to complement the more"archival"nature of the main conferences with research results in a number of selected and more "avant-garde"areas related to the general topic of Web-based distributed c- puting. For instance, the so-called Semantic Web has given rise to several novel research areas combining linguistics, information systems technology and ar- ?cial intelligence, such as the modeling of (legal) regulatory systems and the ubiquitous nature of their usage. We were glad to see that seven of our s- cessful earlier workshops (ADI, EI2N, SWWS, ORM, OnToContent, MONET, ISDE) re-appearedin 2010 with, in some cases, a fourth or even ?fth edition, - ten in alliance with other older or newly emerging workshops,and that no fewer than four brand-new independent workshops could be selected from proposals and hosted: AVYTAT, DATAVIEW, P2PCDVE, SeDeS. von Meersman, Robert und Dillon, Tharam und Herrero, Pilar