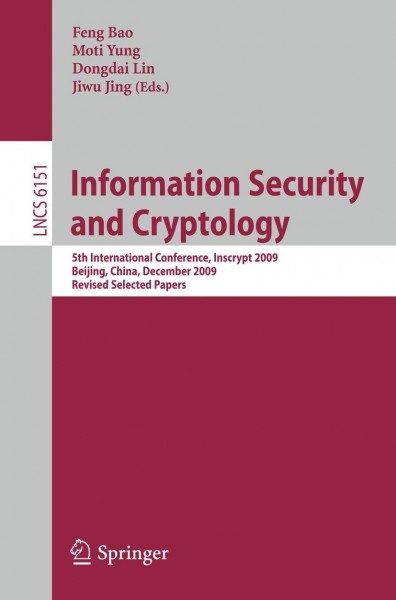 The5thChinaInternationalConferenceonInformationSecurityandCryptology (Inscrypt 2009) was co-organized by the State Key Laboratory of Information SecurityandbytheChineseAssociationforCryptologicResearchincooperation with the International Association for Cryptologic Research (IACR). The c- ference was held in Beijing, China, in the middle of December, and was further sponsored by the Institute of Software, the Graduate University of the Chinese Academy of Sciences and the National Natural Science Foundations of China. The conference is a leading annual international event in the area of cryptog- phy and information security taking place in China. The scienti?c program of the conference covered all areas of current research in the ?eld, with sessions on central areas of cryptographic research and on many important areas of - formation security. The conference continues to get the support of the entire international community, re?ecting on the fact that the research areas covered byInscryptareimportantto moderncomputing,whereincreasedsecurity,trust, safety and reliability are required. The international Program Committee of Inscrypt 2009 received a total of 147 submissions from more than 20 countries and regions, from which only 32 submissions were selected for presentation, 22 of which in the regular papers track and 10 submissions in the short papers track. All anonymous submissions were reviewed by experts in the relevant areas and based on their ranking, te- nical remarks and strict selection criteria the papers were chosen for the various tracks. The selection to both tracks was a highly competitive process. von Bao, Feng und Yung, Moti und Lin, Dongdai und Jing, Jiw