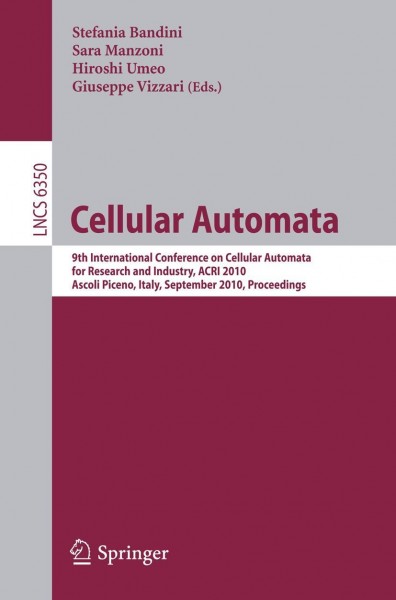 Thisvolumecollectsthepapersselectedforpresentationatthe9thInternational Conference on Cellular Automata for Research and Industry (ACRI 2010), held in Ascoli Piceno (Italy), September 21-24, 2010. ACRI conferences have been o?ering since 1994 a biennial scienti?c meeting to both scientists and innovation managersin academia and industriy to express and discuss their viewpoints on current and future trends, challenges, and sta- of-the-art solutions to various problems in the ?elds of arts, biology, chemistry, communication,ecology,economy,engineering,networks,physics, socialscience, and tra?c control. ACRI 2010 was organized by the Complex Systems and - ti?cial Intelligence (CSAI) research center of the University of Milano-Bicocca as a forum for the presentation and discussion of specialized results as well as general contributions to the growth of the cellular automata approach and its application. Cellular automata represent a very powerful approach to the study of spatio-temporal systems where complex phenomena are built up out of many simple localinteractions. The ACRI conferenceserieswas?rstorganizedin Italy (ACRI1994inRende,ACRI1996inMilan,andACRI1998inTrieste),andafter having moved to other Europeanand international settings, this year came back to Italy: ACRI 2000 in Karlsruhe (Germany), ACRI 2002 in Geneva (Switz- land), ACRI 2004 in Amsterdam (The Netherlands), ACRI 2006 in Perpignan (France), and ACRI 2008 in Yokohama (Japan). In order to give a perspective in which both theoretical and applicational - pectsofcellularautomatacontributetothegrowthofthearea,thisbookmirrors the structure of the conference, groupingthe 74 papers into two main parts. von Bandini, Stefania und Manzoni, Sara und Umeo, Hiroshi und Vizzari, Giuseppe