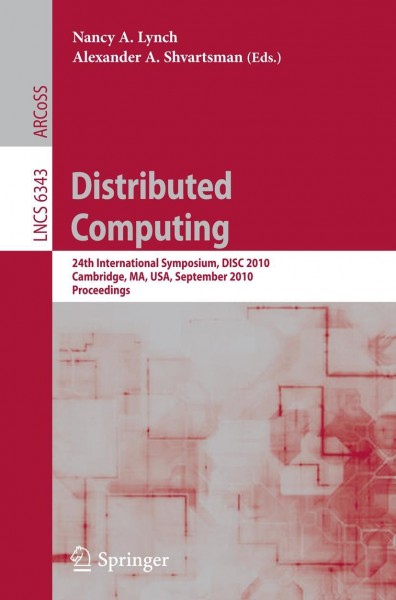 DISC, the International Symposium on DIStributed Computing, is an inter- tional forum on the theory, design, analysis, implementation and application of distributed systems and networks. DISC is organized in cooperation with the European Association for Theoretical Computer Science (EATCS). This volume contains the papers presented at DISC 2010, the 24th Inter- tional Symposium on Distributed Computing, held on September 13-15,2010 in Cambridge, Massachusetts. The volume also includes the citation for the 2010 Edsger W. Dijkstra Prize in Distributed Computing, jointly sponsored by DISC and PODC (the ACM Symposium on Principles of Distributed Computing), which was presented at PODC 2010 in Zurich to Tushar D. Chandra, Vassos Hadzilacos, and Sam Toueg for their work on failure detectors. Therewere135paperssubmittedtothesymposium(inadditiontherewere14 abstract-only submissions). The Program Committee selected 32 contributions out of the 135 full-paper submissions for regular presentations at the sym- sium. Each presentation is accompanied by a ?fteen-page paper in this volume. Everysubmitted paper was read and evaluated by at least three members of the ProgramCommittee. The committee was assisted by more than 120 external - viewers. The Program Committee made its ?nal decisions during the electronic meeting held on June 18-29, 2010. Revised and expanded versions of several selected papers will be consideredfor publication in a special issue of the journal Distributed Computing. TheprogramalsoincludedthreeinvitedlecturesbyRachidGuerraoui(EPFL, Switzerland), Barbara Liskov (MIT, USA), and Nitin Vaidya (University of Il- nois, USA). von Lynch, Nancy A. und Shvartsman, Alexander A.