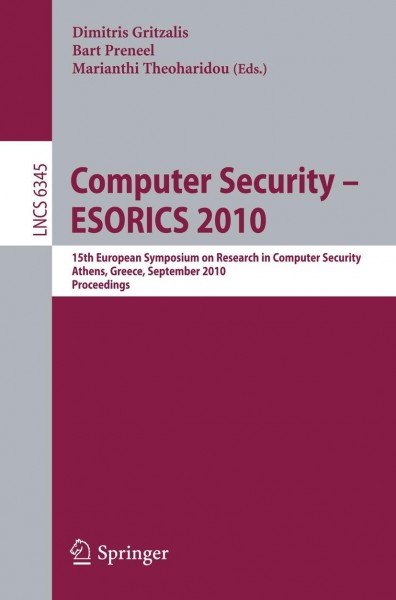 The EuropeanSymposium on Researchin Computer Security (ESORICS) has a tradition that goes back two decades. It tries to bring together the international research community in a top-quality event that covers all the areas of computer security, ranging from theory to applications. ESORICS 2010 was the 15th edition of the event. It was held in Athens, Greece, September 20-22, 2010. The conference received 201 submissions. The papers went through a careful review process. In a ?rst round, each paper - ceived three independent reviews. For the majority of the papers an electronic discussion was also organized to arrive at the ?nal decision. As a result of the review process, 42 papers were selected for the ?nal program, resulting in an - ceptance rate of as low as 21%. The authors of accepted papers were requested to revise their papers, based on the comments received. The program was c- pleted with an invited talk by Udo Helmbrecht, Executive Director of ENISA (European Network and Information Security Agency). ESORICS 2010 was organized under the aegisof three Ministries of the G- ernment of Greece, namely: (a) the Ministry of Infrastructure, Transport, and Networks, (b) the General Secretariat for Information Systems of the Ministry of Economy and Finance, and (c) the General Secretariat for e-Governance of the Ministry of Interior, Decentralization, and e-Government. von Gritzalis, Dimitris und Preneel, Bart und Theoharidou, Marianthi