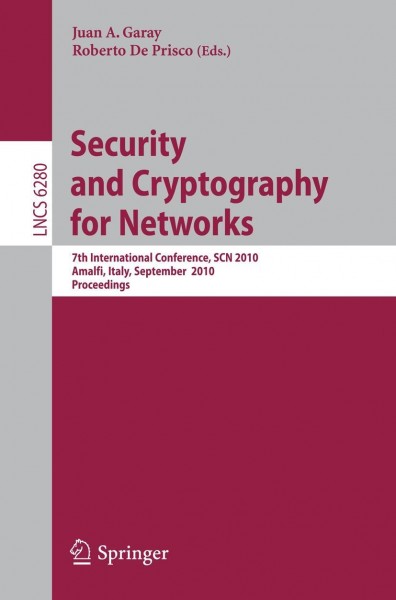 Security and Cryptography for Networks

The7thConferenceonSecurityandCryptographyforNetworks(SCN2010)was heldinAmal?,Italy,during September 13-15,2010.Thisbiennialconferencehas traditionally been held in Amal?, with the exception of the ?fth edition which washeldinnearbyMaiori.Thisyeartheconferencereceivedthe?nancialsupport oftheDepartmentof"InformaticaedApplicazioni"andoftheFacultyofScience of the University of Salerno, Italy. The wide availability of computer networks, and in particular of the global Internet, o?ers the opportunity to perform electronically and in a distributed way a wide range of transactions. Hence, cryptography and security assume an increasingly important role in computer networks, both as critical enablers of new functionalities as well as warrantors of the mechanisms' soundness and safety. The principal aim of SCN as a conference is to bring together researchers in the above ?elds, with the goal of fostering cooperation and exchange of ideas in the stunning Amal? Coast setting. The conference received 94 submissions-a record-high number for the SCN conference series-in a broad range of cryptography and security areas, out of which 27 wereaccepted for publication in these proceedings on the basis of qu- ity, originality, and relevance to the conference's scope. At least three Program Committee(PC)members-outof27world-renownedexpertsintheconference's various areas of interest-reviewed each submitted paper, while submissions - authored by a PC member were subjected to the more stringent evaluation of ?ve PC members. von Garay, Juan A. und De Prisco, Roberto