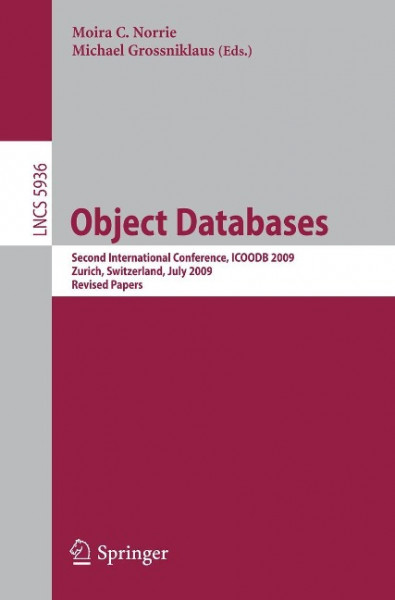 ICOODB 2009 was the second in a series of international conferences aimed at promoting the exchange of information and ideas between members of the objectdatabasecommunity. A keyfeatureof the conferencewasits goalto bring together developers, users and researchers. The conference had three di?erent trackso?eredasatutorialday,anindustrydayandaresearchday. Inaddition,a demo sessionwithcontributionsfromallthree communities enabledparticipants to see the latest and on-going developments in object database technologies, supporting tools and also applications. The conference proceedings presented as this volume consist of the papers presentedintheresearchtrack. Bypublishing theseaftertheconference,authors were given an opportunity to revise and extend their papers based on feedback and discussions held during the conference. Six of the papers were selected from submissions based on reviews by at least three members of the Program C- mittee. These papers address a number of classic database issues such as query processing, transaction processing, event models and the coupling of data and services in the context of modern object databases. In addition, the research track included three invited presentations from researchers who were leaders in the ?eld during what might be called the ?rst generation of object databases back in the 1980s and early 1990s. At this time, research in object data models as well as object-oriented databases and p- sistent programming languages was very active. Over the years, this research became less fashionable and many researchers moved into other ?elds. However, somecontinuedand astechnologiesandmarketsevolvedso did their models and systems. von Norrie, Moira C. und Grossniklaus, Michael