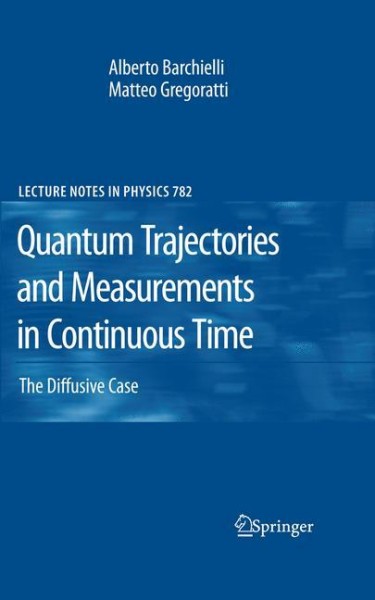 Quantum Trajectories and Measurements in Continuous Time
The Diffusive Case

Quantum trajectory theory is largely employed in theoretical quantum optics and quantum open system theory and is closely related to the conceptual formalism of quantum mechanics (quantum measurement theory). However, even research articles show that not all the features of the theory are well known or completely exploited. We wrote this monograph mainly for researchers in theoretical quantum optics and related ?elds with the aim of giving a self-contained and solid p- sentation of a part of quantum trajectory theory (the diffusive case) together with some signi?cant applications (mainly with purposes of illustration of the theory, but which in part have been recently developed). Another aim of the monograph is to introduce to this subject post-graduate or PhD students. To help them, in the most mathematical and conceptual chapters, summaries are given to ?x ideas. Moreover, as stochastic calculus is usually not in the background of the studies in physics, we added Appendix A to introduce these concepts. The book is written also for ma- ematicians with interests in quantum theories. Quantum trajectory theory is a piece of modern theoretical physics which needs an interplay of various mathematical subjects, such as functional analysis and probability theory (stochastic calculus), and offers to mathematicians a beautiful ?eld for applications, giving suggestions for new mathematical developments. von Barchielli, Alberto und Gregoratti, Matteo