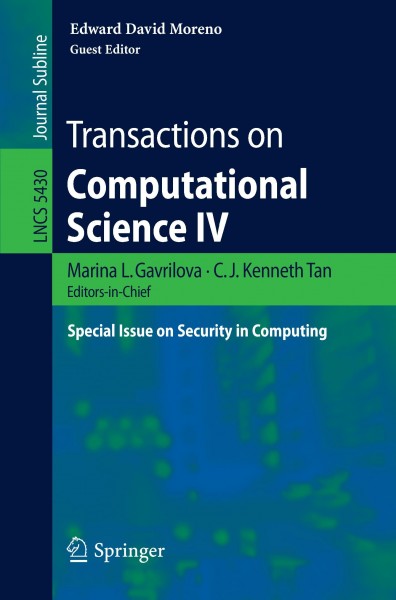 In the second contribution, entitled "Behavioral Characterization for Network Anomaly Detection," Victor P. Roche and Unai Arronategui propose a methodology for detecting abnormal traffic on the net, such as worm attacks, based on the obser- tion of the behavior of different elements at the network edges. This methodology means an advance in the detection of a new infection in the backbone of the network, but also in the identification of the infected hosts of a specific network. The authors try to detect network anomalies by tracking the behavior of different network levels. This proposed method is not based on intrinsic characteristics of the worm but on their manner of acting. This methodology has proved its effectiveness in real infections caused by viruses such as SpyBot and Agobot in accordance with experimental tests. In the third contribution, which is entitled "The Power of Anonymous Veto in Public Discussion," Feng Hao and Piotr Zielinski propose an exceptional solution--Anonymous Veto Network (or AV-net)--to allow a group of participants to compute a boolean-OR function securely. This protocol is provably secure under the Decision Diffie-Hellman (DDH) and random oracle assumptions.