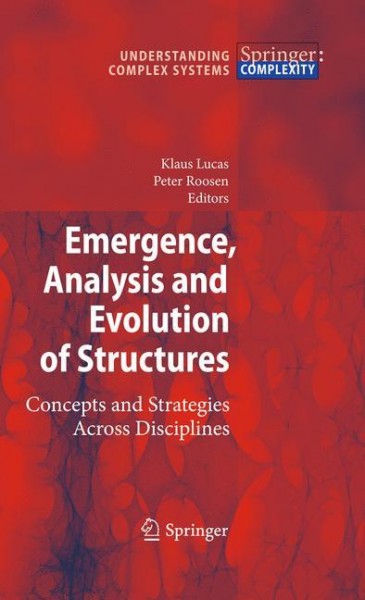 Emergence, Analysis and Evolution of Structures

Emergence, Analysis and Evolution of Structures
Concepts and Strategies Across Disciplines

In May 2002 a number of about 20 scientists from various disciplines were invited by the Berlin-Brandenburg Academy of Sciences and Humanities to participate in an interdisciplinary workshop on structures and structure generating processes. The site was the beautiful little castle of Blankensee, south of Berlin. The disciplines represented ranged from mathematics and information theory, over various ?elds of engineering, biochemistry and biology, to the economic and social sciences. All participants presented talks explaining the nature of structures considered in their ?elds and the associated procedures of analysis. It soon became evident that the study of structures is indeed a common c- cern of virtually all disciplines. The motivation as well as the methods of analysis, however, differ considerably. In engineering, the generation of artifacts, such as infrastructures or technological processes, are of primary interest. Frequently, the analysis aims there at de?ning a simpli?ed mathematical model for the optimization of the structures and the structure generating processes. Mathematical or heuristic methods are applied, the latter preferably of the type of biology based evolutionary algorithms. On the other hand, setting up complex technical structures is not pos- ble by such simpli?ed model calculations but requires a different and less model but rather knowledge-based type of approach, using empirical rules rather than formal equations. In biochemistry, interest is frequently focussed on the structures of molecules, such as proteins or ribonucleic acids. Again, optimal structures can usually be de?ned. von Lucas, Klaus