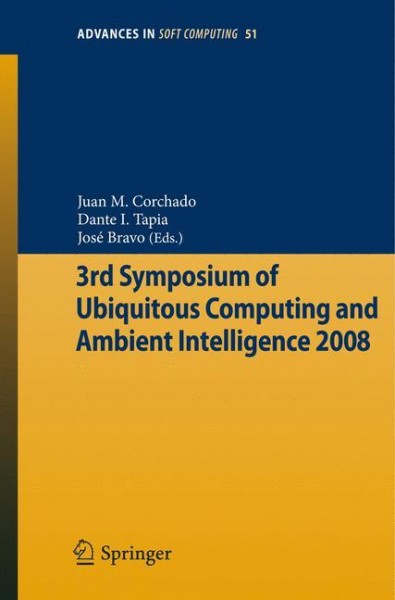 The Symposium on Ubiquitous Computing and Ambient Intelligence (UCAmI) began as a workshop held in 2003 in San Sebastián (Spain) under the Spanish Artificial Intelligence Conference. This event gathered 32 attendees and 18 papers were p- sented. The second edition, already as a Symposium, took place in Granada (Spain) under the first Spanish Computer Science Conference (CEDI). Later, in 2006, a s- ond workshop was celebrated in Ciudad Real and, in 2007; the second Symposium was organized in Zaragoza by the CEDI conference. Now we continue to work on the organization of this event in Salamanca, a beautiful Spanish city. The European Community and the Sixth and Seventh Framework Programs - courage researchers to explore the generic scope of the AmI vision. In fact, some researchers have a crucial role in this vision. Emile Aarts from Philips describes - bient Intelligence as "the integration of technology into our environment, so that p- ple can freely and interactively utilize it". This idea agrees with the proposal of Mark Weiser regarding the Ubiquitous Computing paradigm. von Corchado, Juan M. und Tapia, Dante und Bravo, Jose