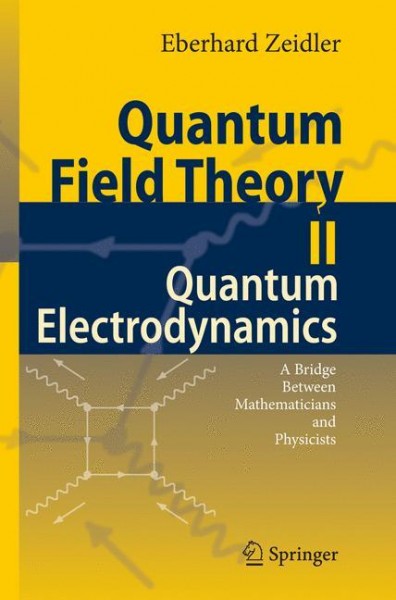 And God said, Let there be light; and there was light. Genesis 1,3 Light is not only the basis of our biological existence, but also an essential source of our knowledge about the physical laws of nature, ranging from the seventeenth century geometrical optics up to the twentieth century theory of general relativity and quantum electrodynamics. Folklore Don't give us numbers: give us insight! A contemporary natural scientist to a mathematician The present book is the second volume of a comprehensive introduction to themathematicalandphysicalaspectsofmodernquantum?eldtheorywhich comprehends the following six volumes: Volume I: Basics in Mathematics and Physics Volume II: Quantum Electrodynamics Volume III: Gauge Theory Volume IV: Quantum Mathematics Volume V: The Physics of the Standard Model Volume VI: Quantum Gravitation and String Theory. It is our goal to build a bridge between mathematicians and physicists based on the challenging question about the fundamental forces in . macrocosmos (the universe) and . microcosmos (the world of elementary particles). The six volumes address a broad audience of readers, including both und- graduate and graduate students, as well as experienced scientists who want to become familiar with quantum ?eld theory, which is a fascinating topic in modern mathematics and physics. von Zeidler, Eberhard

The author, Prof. Dr. Dr. h.c. Eberhard Zeidler, is retired director of the Max Planck Institute for Mathematics in the Sciences in Leipzig (Germany). In 1996 he was one of the founding directors of this institute. He is a member of the National Academy of Natural Scientists Leopoldina. In 2006 he was awarded the "Alfried Krupp Wissenschaftspreis" of the Alfried Krupp von Bohlen und Halbach-Stiftung.  He is author of the following books:(a) E. Zeidler, Nonlinear Functional Analysis and its Applications, Vols. I-IV,Springer Verlag New York, 1984-1988 (third edition 1998).(b) E. Zeidler, Applied Functional Analysis, Vol. 1: Applications to Mathematical Physics, 2nd edition, 1997, Springer Verlag, New York.(c) E. Zeidler, Applied Functional Analysis, Vol. 2: Main Principles and Their Applications, Springer-Verlag, New York, 1995.(d) E. Zeidler, Oxford Users' Guide to Mathematics, Oxford University Press, 2004 (translated from German).