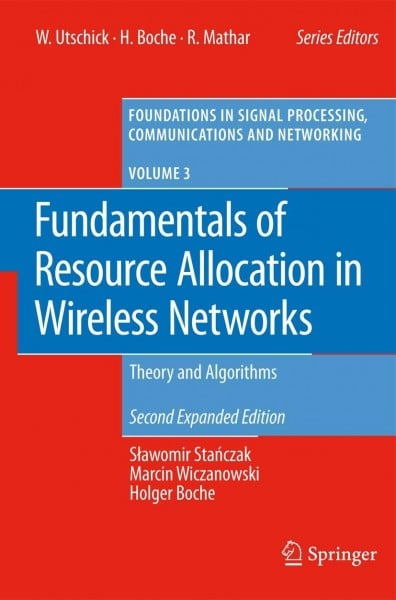 Fundamentals of Resource Allocation in Wireless Networks
Theory and Algorithms

The purpose of this book is to provide tools for a better understanding of the fundamental tradeo?s and interdependencies in wireless networks, with the goal of designing resource allocation strategies that exploit these int- dependencies to achieve signi?cant performance gains. Two facts prompted us to write it: First, future wireless applications will require a fundamental understanding of the design principles and control mechanisms in wireless networks. Second, the complexity of the network problems simply precludes the use of engineering common sense alone to identify good solutions, and so mathematics becomes the key avenue to cope with central technical problems in the design of wireless networks. In this book, two ?elds of mathematics play a central role: Perron-Frobenius theory for non-negative matrices and optimization theory. This book is a revised and expanded version of the research monograph "Resource Allocation in Wireless Networks" that was published as Lecture Notes in Computer Sciences (LNCS 4000) in 2006. Although the general structure has remained unchanged to a large extent, the book contains - merous additional results and more detailed discussion. For instance, there is a more extensive treatment of general nonnegative matrices and interf- ence functions that are described by an axiomatic model. Additional material on max-min fairness, proportional fairness, utility-based power control with QoS (quality of service) support and stochastic power control has been added. von Stanczak, Slawomir