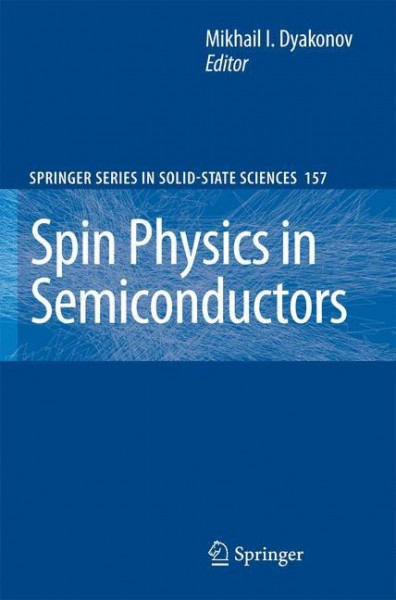 The purpose of this collective book is to present a non-exhaustive survey of sp- related phenomena in semiconductors with a focus on recent research. In some sense it may be regarded as an updated version of theOpticalOrientation book, which was entirely devoted to spin physics in bulk semiconductors. During the 24 years that have elapsed, we have witnessed, on the one hand, an extraordinary development in the wonderful semiconductor physics in two dim- sions with the accompanying revolutionary applications. On the other hand, during the last maybe 15 years there was a strong revival in the interest in spin phen- ena, in particular in low-dimensional semiconductor structures. While in the 1970s and 1980s the entire world population of researchers in the ?eld never exceeded 20 persons, now it can be counted by the hundreds and the number of publications by the thousands. This explosive growth is stimulated, to a large extent, by the hopes that the electron and/or nuclear spins in a semiconductor will help to accomplish the dream of factorizing large numbers by quantum computing and eventually to develop a new spin-based electronics, or "spintronics". Whether any of this will happen or not, still remains to be seen. Anyway, these ideas have resulted in a large body of interesting and exciting research, which is a good thing by itself. The ?eld of spin physics in semiconductors is extremely rich and interesting with many spectacular effects in optics and transport. von Dyakonov, Mikhail I.

From 1962 to 1998 M. I. Dyakonov was a researcher at the Ioffe Institute in St. Petersburg. In 1998 he became professor at Université Montpellier II, France. His name is accociated with the Dyakonov-Perel mechanism of spin relaxation in semiconductors, the Dyakonov-Shur plasma instability in two-dimensional electron fluid, and the Dyakonov waves at interfaces of transparent anisotropic materials. In 1971, together with V.I. Perel he has predicted new spin-related transport phenomena, one of which, now called the Spin Hall Effect, has become a subject of extensive experimental and theoretical studies. He was awarded the State Prize of USSR in 1973 and the Ioffe prize of the Russian Academy of Sciences in 1993.