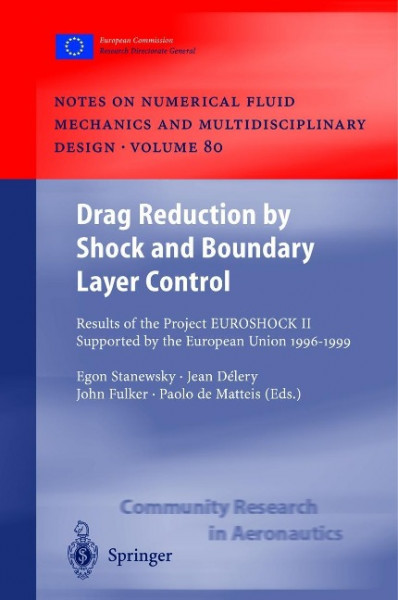 Drag Reduction by Shock and Boundary Layer Control
Results of the Project EUROSHOCK II. Supported by the European Union 1996-1999

The survival of the Aeronautical Industries of Europe in the highly competitive World Aviation Market is strongly dependent on such factors as time-to-market of a new or derivative aircraft and on its manufacturing costs but also on the achievement of a competitive technological advantage by which an increased market share can be gained. Recognizing this, cooperative research is continuously encouraged and co-financed by the European Union in order to strengthen the scientific and technological base of the Aeronautical Industries thus providing - among others - the technological edge needed for survival. Corresponding targets of research within Area 3, Technologies for Transport Means, and here in particular Area 3A, Aeronautics Technologies, of the Industrial and Materials Technologies Program ( Brite -EuRam III, 1994 -1998) have been identified to be aircraft efficiency, cost effectiveness and environmental impact. Concerning aircraft efficiency - relevant to the present research - a reduction in aircraft drag of 10%, a reduction in aircraft fuel consumption of 30%, and a reduction in airframe, engine and system weight of 20% are envisaged. Meeting these objectives has, of course, also a strong positive impact on the environment. von Stanewsky, Egon und Delery, J. und Fulker, John und Matteis, Paolo de