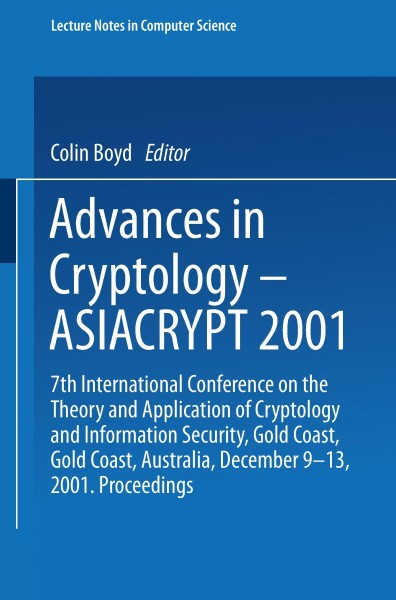 The origins of the Asiacrypt series of conferences can be traced back to 1990, when the ?rst Auscrypt conference was held, although the name Asiacrypt was ?rst used for the 1991 conference in Japan. Starting with Asiacrypt 2000, the conference is now one of three annual conferences organized by the Inter- tional Association for Cryptologic Research (IACR). The continuing success of Asiacrypt is in no small part due to the e?orts of the Asiacrypt Steering C- mittee (ASC) and the strong support of the IACR Board of Directors. There were 153 papers submitted to Asiacrypt 2001 and 33 of these were accepted for inclusion in these proceedings. The authors of every paper, whether accepted or not, made a valued contribution to the success of the conference. Sending out rejection noti?cations to so many hard working authors is one of the most unpleasant tasks of the Program Chair. The review process lasted some 10 weeks and consisted of an initial refe- eing phase followed by an extensive discussion period. My heartfelt thanks go to all members of the Program Committee who put in extreme amounts of time to give their expert analysis and opinions on the submissions. All papers were reviewed by at least three committee members; in many cases, particularly for those papers submitted by committee members, additional reviews were obt- ned. Specialist reviews were provided by an army of external reviewers without whom our decisions would have been much more di?cult. von Boyd, Colin