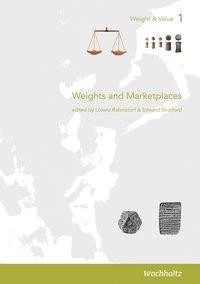 How can we identify balance weights in the archaeological record? What economic changes did such objects bring about? And were formal marketplaces a usual area where such devices were used? What variety can we observe in pre-modern marketplaces worldwide?These are some of the questions which were investigated in two workshops held in 2016 and 2017 in Munich and Göttingen in Germany. The volume ,Weights and marketplaces' presents 21 contributions. The theme of the first part of the volume is the identification and use of early weights from the Chalcolithic and Early Bronze Age in Western Asia to the Early Medieval period in Northern Europe. In the second part, the phenomenology of marketplaces from the Bronze Age to the modern period is discussed within a global perspective.Both workshops were funded by the ERC-2014-CoG 'WEIGHTANDVALUE': Weight metrology and its economic and social impact on Bronze Age Europe, West and South Asia' [Grant no. 648055]. The new series ,Weight and Value' publishes research stemming from this project and related investigations. von Rahmstorf, Lorenz