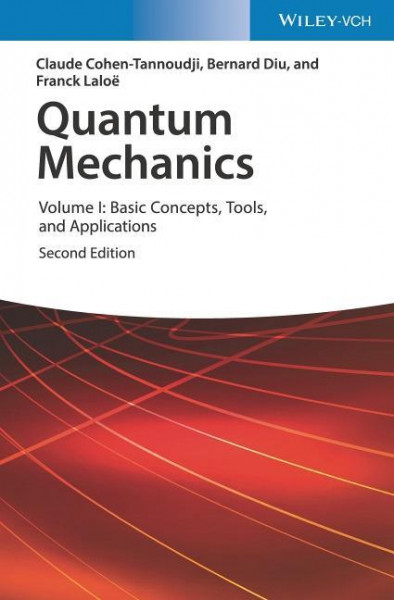 This new edition of the unrivalled textbook introduces the fundamental concepts of quantum mechanics such as waves, particles and probability before explaining the postulates of quantum mechanics in detail. In the proven didactic manner, the textbook then covers the classical scope of introductory quantum mechanics, namely simple two-level systems, the one-dimensional harmonic oscillator, the quantized angular momentum and particles in a central potential. The entire book has been revised to take into account new developments in quantum mechanics curricula. The textbook retains its typical style also in the new edition: it explains the fundamental concepts in chapters which are elaborated in accompanying complements that provide more detailed discussions, examples and applications. * The quantum mechanics classic in a new edition: written by 1997 Nobel laureate Claude Cohen-Tannoudji and his colleagues Bernard Diu and Franck Laloë * As easily comprehensible as possible: all steps of the physical background and its mathematical representation are spelled out explicitly * Comprehensive: in addition to the fundamentals themselves, the book contains more than 350 worked examples plus exercises Claude Cohen-Tannoudji was a researcher at the Kastler-Brossel laboratory of the Ecole Normale Supérieure in Paris where he also studied and received his PhD in 1962. In 1973 he became Professor of atomic and molecular physics at the Collège des France. His main research interests were optical pumping, quantum optics and atom-photon interactions. In 1997, Claude Cohen-Tannoudji, together with Steven Chu and William D. Phillips, was awarded the Nobel Prize in Physics for his research on laser cooling and trapping of neutral atoms. Bernard Diu was Professor at the Denis Diderot University (Paris VII). He was engaged in research at the Laboratory of Theoretical Physics and High Energy where his focus was on strong interactions physics and statistical mechanics. Franck Laloë was a researcher at the Kastler-Brossel laboratory of the Ecole Normale Supérieure in Paris. His first assignment was with the University of Paris VI before he was appointed to the CNRS, the French National Research Center. His research was focused on optical pumping, statistical mechanics of quantum gases, musical acoustics and the foundations of quantum mechanics. von Cohen-Tannoudji, Claude