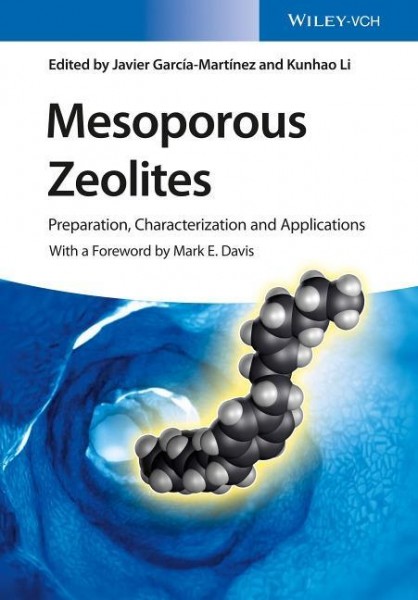 Authored by a top-level team of both academic and industrial researchers in the field, this is an up-to-date review of mesoporous zeolites. The leading experts cover novel preparation methods that allow for a purpose-oriented fine-tuning of zeolite properties, as well as the related materials, discussing the specific characterization methods and the applications in close relation to each individual preparation approach. The result is a self-contained treatment of the different classes of mesoporous zeolites. With its academic insights and practical relevance this is a comprehensive handbook for researchers in the field and related areas, as well as for developers from the chemical industry. von García-Martínez, Javier

Javier García-Martínez is the founder of and chief scientist at Rive Technology, Inc. in Boston, USA, a spin-off from MIT that commercializes mesostructured zeolites to the refining industry. He is also Professor of Inorganic Chemistry and the director of the Molecular Nanotechnology Lab at the University of Alicante, Spain. Since 2011 he is a member of the Bureau of IUPAC and Fellow of the Royal Society of Chemistry. His work has been honored with the European Young Chemist Award in 2006, MIT's Technology Review Award (TR35) in 2007, and by the World Economic Forum, which selected him as a Young Global Leader in 2009. Professor García-Martínez has published extensively in the areas of nanomaterials, catalysis, and energy, and also has over 25 patents to his name. His latest books are "Nanotechnology for the Energy Challenge" (Wiley-VCH, 2014) and "The Chemical Element" (Wiley-VCH, 2011). Kunhao Li is a Project Leader at Rive Technology, Inc. since 2008. He has been heavily involved in the improvement of Rive's core technology in zeolite mesostructuring processes, zeolites and catalysts characterization, testing, and evaluation, as well as extension of application areas of mesostructured zeolites to chemical separations and other catalytic processes. He obtained PhD in chemistry at The George Washington University and did postdoctoral research at Rutgers University. His research work has resulted in many publications in the form of original papers and reviews, book chapters, technical reports, patent applications, and patents.