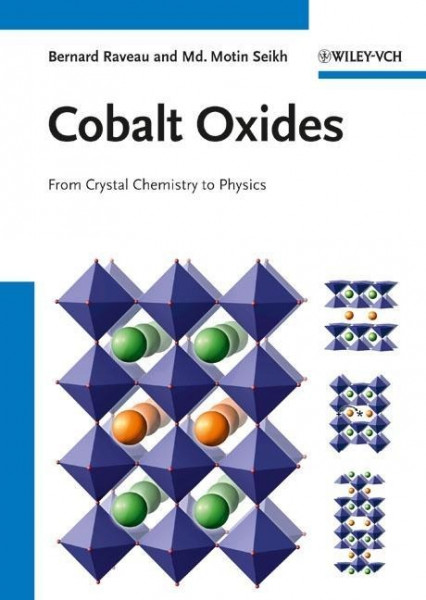 Unparalleled in the breadth and depth of its coverage of all important aspects, this book systematically treats the electronic and magnetic properties of stoichiometric and non-stoichiometric cobaltites in both ordered and disordered phases. Authored by a pioneer and a rising star in the field, the monograph summarizes, organizes and streamlines the otherwise difficult-to-obtain information on this topic. An introductory chapter sets forth the crystal chemistry of cobalt oxides to lay the groundwork for an understanding of the complex phenomena observed in this materials class. Special emphasis is placed on a comprehensive discussion of cobaltite physical properties in different structural families. Providing a thorough introduction to cobalt oxides from a chemical and physical viewpoint as a basis for understanding their intricacies, this is a must-have for both experienced researchers as well as entrants to the field. von Raveau, Bernard und Seikh, Moti

Bernard Raveau is Emeritus Professor at the University of Caen, France. He received his formal education at this University, and at Ecole Nationale Supérieure de Chimie de Caen as Engineer, and obtained his PhD degree in Physics in 1966. He was Director of CRISMAT, the Laboratory for Crystallography and Materials Science, in Caen, from 1986 to 2004, where he presently continues carrying out his research. He is the founder of the National Research Centre of Technology for Materials, CNRT Matériaux, in Caen, and has been Director of this Centre from 2000 to 2010. Bernard Raveau is a specialist of crystal chemistry and discovered many new transition metal oxides, including high Tc superconducting cuprates, CMR manganites, thermoelectric cobaltites and transition metal phosphates. Author of more than 1300 journal publications, and three books, he has received numerous awards including Berndt Mathias Prize and European Italgaz Prize. He is a member of the Institut Universitaire de France, of Académie des Sciences, of the Indian Academy and Fellow of the Royal Society. Dr. Md. Motin Seikh is Assistant Professor in the Department of Chemistry at Visva-Bharati University, Santiniketan, West Bengal, India. He has obtained his PhD from the Solid State and Structural Chemistry Unit, Indian Institute of Science (IISc), Bangalore in 2006. He carried out his postdoctoral research at Laboratoire CRISMAT in Caen, France for two years from 2006 to 2007. Dr. Seikh has published very original papers on various aspects of strongly correlated electron oxides, mainly manganites, ferrites and cobaltites. For his outstanding research contribution he received the Best Thesis Award for his PhD in materials chemistry from IISc in the year 2006. He was also a recipient of Junior and Senior Research Fellowship of the Government of India, and a visiting scientist under the programme of the Japanese Society for the Promotion of Science in the year 2004. He has also authored 'Investigations on Transition Metal Oxides' Lambert Academic Publishing, Germany in 2010.