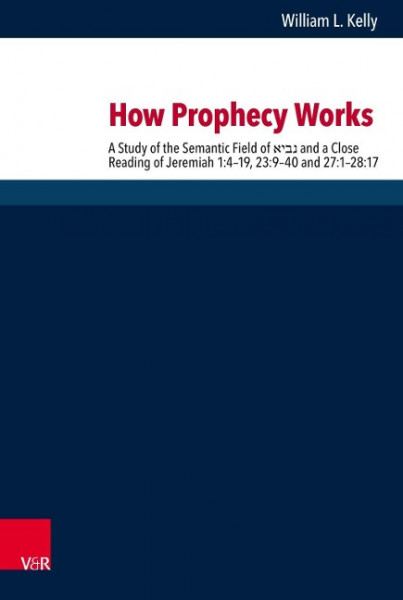 There is a longstanding scholarly debate on the nature of prophecy in ancient Israel. Until now, no study has based itself on the semantics of the Hebrew lexeme nabî¿ ("prophet"). This investigation by William L. Kelly discusses the nature and function of prophecy in the corpus of the Hebrew book of Jeremiah. It analyses all occurrences of nabî¿ in Jeremiah and performs a close reading of three primary texts, Jeremiah 1.4-19, 23.9-40 and 27.1-28.17. The result is a detailed explanation of how prophecy works, and what it meant to call someone a nabî¿ in ancient Israel. Combining the results of the semantic analysis and close readings, the study reaches conclusions for six main areas of study: (1) the function and nature of prophecy; (2) dreams and visions; (3) being sent; (4) prophets, priests and cult; (5) salvation and doom; and (6) legitimacy and authority. These conclusions explain the conceptual categories related to nabî¿ in the corpus. I then situate these findings in two current debates, one on the definition of nabî¿ and one on cultic prophecy. This study contributes to critical scholarship on prophecy in the ancient world, on the book of Jeremiah, and on prophets in ancient Israel. It is the first major study to analyse nabî¿ based on its semantic associations. It adds to a growing consensus which understands prophecy as a form of divination. Contrary to some trends in Jeremiah scholarship, this work demonstrates the importance of a close reading of the Masoretic (Hebrew) text. This study uses a method of a general nature which can be applied to other texts. Thus there are significant implications for further research on prophecy and prophetic literature. von Kelly, William L.