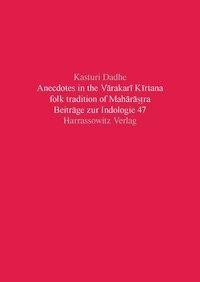 Anecdotes in the Varakari Kirtana folk tradition of Maharastra

Anecdotes in the Varakari Kirtana folk tradition of Maharastra

Since centuries, the Varakari saints of Maharastra have used the kirtana performances to deliver the message of the Advaita philosophy. Kirtana, as a performance art form, extensively uses music, chanting, and witty anecdotes to make this philosophy more accessible for the common folk. This makes the kirtanakara a potent medium between the age old Advaita philosophy and the contemporary masses. The Advaita religious didactic canon in Samskrta, was translated by the Varakari saints in Marathi for the benefit of the local populace. This is simplified further by the kirtanakaras by using lucid everyday anecdotes; elevating the performance of a kirtana from simply being a sermon to being a powerful yet persuasive dialogue between a speaker and a listener.The book by Kasturi Dadhe specifically studies the use of anecdotes and their relevance in bringing across the message of the Advaita philosophy. A collection of 180 such anecdotes narrated by the kirtanakaras in Marathi over a period of 6 decades from 1950 to 2008 have been transliterated and translated from Marathi to English and each is accompanied with an in depth analysis and summary. The anecdotes are segregated under 11 social themes concerning the daily lives of the common people, which adds insights in to the social attitudes of the times. von Dadhe, Kasturi