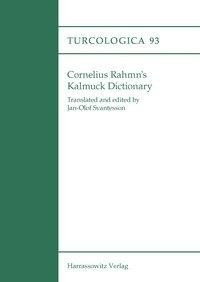 The Kalmucks are a Mongolian people who moved from western Mongolia and northwestern China to Russia in the 1630s and settled in the lower Volga area, to the north and northwest of the Caspian Sea. They have their own script, created in 1648 as a modification of the Old Mongolian script. The Kalmucks are still living in the Kalmuck Republic (Kalmykia) in the Russian Federation, but now use the Cyrillic alphabet. Today most Kalmucks speak only Russian. Cornelius Rahmn (1785-1853), a Swedish clergyman who worked as a missionary among the Kalmucks in 1819-1823, compiled during this time a Kalmuck-Swedish dictionary containing more than 7,000 words and many example sentences. This dictionary was not published by Rahmn, but the manuscript is kept by Uppsala University Library. It is earlier than the first printed Kalmuck dictionary, published in 1852 by the German missionary Heinrich August Zwick. Jan-Olof Svantesson now presents the first printed edition of Rahmn's dictionary. The Kalmuck words, written in the old Kalmuck script by Rahmn, are here printed in the Latin alphabet, and the words have been arranged in alphabetical order. Rahmn's Swedish translations of the Kalmuck words are given, and are also provided with English translations. von Svantesson, Jan-Olof