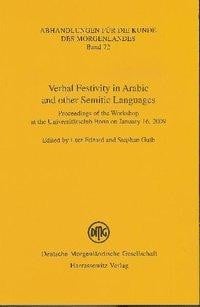 Verbal Festivity in Arabic and Other Semitic Languages

Verbal Festivity in Arabic and Other Semitic Languages
Proceedings of the Workshop at the Universitätsclub Bonn on January 16, 2009

"Verbal Festivity in Arabic and Other Semitic Languages" edited by Lutz Edzard and Stephan Guth deals with one of the most essential and fascinating, though still much neglected aspects of Middle Eastern culture(s) - politeness and the ways it can be expressed or encoded in language. The contributions to the Proceedings of a workshop held in Bonn in 2009 attempt to shed spotlights on several aspects of Verbal Festivity. They include a comparative approach (English-German-Arabic) to the cultural concepts of "politeness", "Höflichkeit", and "adab" in general (Stephan Guth); a survey of everyday-life polite formulae and expressions of courtesy in Palestinian Arabic (Avihai Shivtiel); a study of the morphological patterns of Arabic formulaic terminology itself (Pierre Larcher); a linguistic analysis of how the wish, or intention, to fulfill ethical duties or prescriptions is expressed in some neo-Aramaic dialects (Geoffrey Khan); a comparative investigation, covering several Semitic languages, of how to remain polite through suppressing explicit mentioning of the negative consequences the addressee will face if he does not comply with the speaker's suggestions (Lutz Edzard); and an analysis of formulae used in commercial documents at a 13th century Red Sea port (Andreas Kaplony).