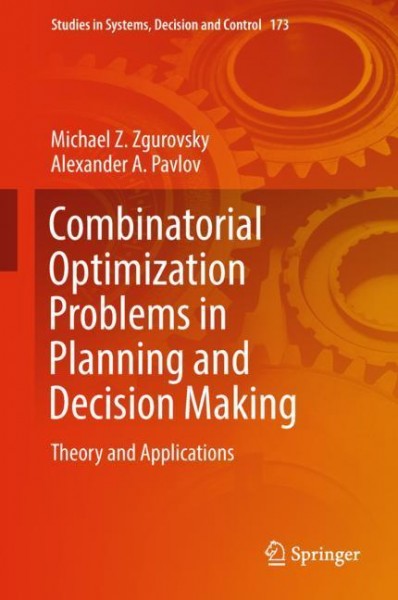 The book focuses on the next fields of computer science: combinatorial optimization, scheduling theory, decision theory, and computer-aided production management systems. It also offers a quick introduction into the theory of PSC-algorithms, which are a new class of efficient methods for intractable problems of combinatorial optimization. A PSC-algorithm is an algorithm which includes: sufficient conditions of a feasible solution optimality for which their checking can be implemented only at the stage of a feasible solution construction, and this construction is carried out by a polynomial algorithm (the first polynomial component of the PSC-algorithm); an approximation algorithm with polynomial complexity (the second polynomial component of the PSC-algorithm); also, for NP-hard combinatorial optimization problems, an exact subalgorithm if sufficient conditions were found, fulfilment of which during the algorithm execution turns it into a polynomial complexity algorithm. Practitioners and software developers will find the book useful for implementing advanced methods of production organization in the fields of planning (including operative planning) and decision making. Scientists, graduate and master students, or system engineers who are interested in problems of combinatorial optimization, decision making with poorly formalized overall goals, or a multiple regression construction will benefit from this book. von Zgurovsky, Michael Z.

Michael Z. Zgurovsky and Alexander A. Pavlov, National Technical University of Ukraine "Kiev Polytechnic Institute", Ukraine. Michael Zgurovsky is the Rector of National Technical University of Ukraine Kiev Polytechnic Institute since 1992.He graduated as Doctor of Technical Sciences, Academician of the National Academy of Sciences of Ukraine and Academician of the Academy of Sciences of Russian Federation. During 1994-1999 Michael Zgurovsky was the Minister of Education of Ukraine. Michael Zgurovsky is the Director of the Institute for Applied System Analysis of the National Academy of Sciences of Ukraine and Ministry of Education and Science of Ukraine. Among his scientific interests are sustainable development, system analysis, decision making under uncertainty conditions, and analysis and modeling of complex systems of various nature.He is an author of more that 300 scientific publications, including 22 books published in different countries. He has made 25 inventions. Michael Zgurovsky is also the President of the Association of Rectors of Technical Universities of Ukraine. He is a Member of the Academies of Science of many countries, and many international educational institutions, Senior Member of IEEE, Member of the Governing Board of UNESCO Institute for Information Technologies in Education (Moscow, Russia), the National Representative of Ukraine in CODATA, Member of EDNES, National Representative of Ukraine in ICSU. Alexander A. Pavlov is a prominent scientist in the field of computer science and management, has significant scientific achievements in the areas of mathematical methods of operations research, the theory of algorithms, modern control theory, information and software of the integrated ACS small batch production type. Main results of his work are reflected in 192 published scientific works, including 10 books. A.A. Pavlov is a Chairman of the Scientific Advisory Board at DPC of the professional direction "Computer science and new information technologies" of Ministry of Education and Science of Ukraine, head of scientific-methodical commission of MES of Ukraine in the "Computer Science" field , head of the Expert Council of Higher Attestation Commission of Ukraine. He has been awarded as "Honored Worker of Science of Ukraine" and in 2001 received the Scientific Prize named after V.N. Glushkov from the National Academy of Sciences of Ukraine.