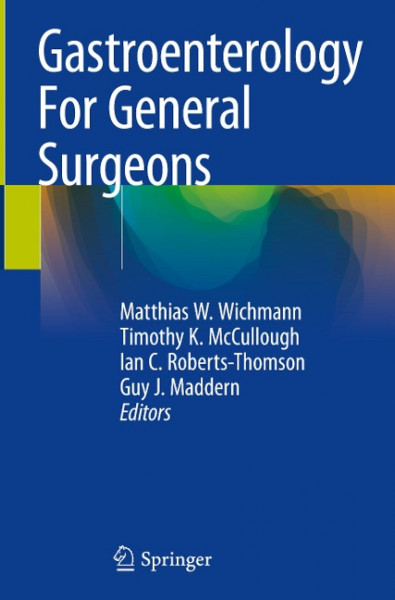 This book fills a void in the market for specialists who are working in areas without the support of gastroenterologists. Due to a lack of local expertise, treatment decisions in the field of gastroenterology frequently have to be made by non-gastroenterologists. The book addresses this problem by providing clear instructions on the diagnosis, medical management and on-going treatment of the most common disease patterns encountered in gastroenterology. Written by leading experts in their respective fields, it offers up-to-date evidence and insights into these conditions to enable adequate decision-making and safe management of these conditions. von Wichmann, Matthias W. und McCullough, Timothy K. und Roberts-Thomson, Ian C. und Maddern, Guy J.

Matthias W. Wichmann gained his medical degree from the University of Würzburg (1994). His research at Michigan State University and Brown University focused on the immunological effects of trauma and shock (Chaudry). He completed his surgical training at the University of Munich (Schildberg, Jauch). Since 2006 he has been a consultant general surgeon at Mount Gambier (SA). His interests include laparoscopic, colorectal and rural surgery. He is an academic at the University of Adelaide and Flinders University. He is co-editor of textbooks on rural, palliative and basic surgery. He has published over 70 peer-reviewed papers and book chapters. Timothy K. McCullough is a consultant surgeon. He was schooled in Surrey, England, and studied medicine at St. Bartholomew's Hospital Medical College, University of London. His Master of Surgery degree was at Imperial College, London, exploring the significance of circulating colorectal cancer cells, for which he won the Moynihan Medal of the ASGBI in 2004. Higher Surgical Training was in the Northwest Thames rotation. Tim was RSO at St. Mark's Hospital, and completed specialist training in general and colorectal Surgery before appointment to The Lister Hospital in Hertfordshire as a consultant. During his career as a consultant, Tim has led the Colorectal Cancer MDT, been clinical director for Surgery, and laparoscopic colorectal surgical trainer. Tim has recently moved to Mount Gambier, South Australia to a rural and much more general surgical practice, but with a continuing interest in colorectal surgery. Ian Roberts-Thomson was director of gastroenterology at the Queen Elizabeth Hospital from 1985 until 2014. He was appointed as a clinical professor at the University of Adelaide in 1999 and, on his retirement in 2014, was awarded the title Emeritus Professor. His research interests have included gastrointestinal infections, endoscopy with an emphasis on ERCP and the pathogenesis of inflammatory bowel disease. He has more than 170 publications listed on PubMed as well as contributing chapters to several books. His current interests include the use of fecal transplantation for ulcerative colitis and the role of cost-effective analyses in the allocation of funds for the prevention and treatment of gastrointestinal and liver disease. Guy J. Maddern is the RP Jepson Professor of Surgery at the University of Adelaide, director of surgery at The Queen Elizabeth Hospital and Royal Adelaide Hospital, director of research at the Basil Hetzel Institute for Translational Health Research at The Queen Elizabeth Hospital and director of Surgical Research and Evaluation (incorporating ASERNIP-S) at the Royal Australasian College of Surgeons. He trained at the University of Adelaide and became a fellow of the Royal Australasian College of Surgeons in 1989. His clinical interests include the physiological impact of laparoscopic surgery, and more recently the development of techniques to manage metastatic hepatic disease. He has over 400 publications in scientific journals and has contributed to over a dozen surgical texts.