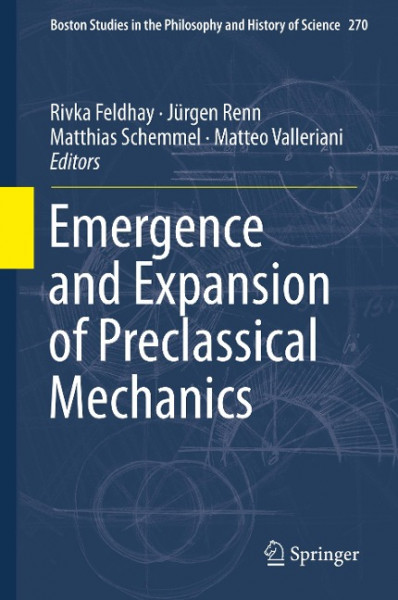 Emergence and Expansion of Preclassical Mechanics

Emergence and Expansion of Preclassical Mechanics

This book is divided into two sections. The first section is concerned with the emergence and expansion of a form of mechanical knowledge defined by us as pre-classical mechanics. The definition purports to the period roughly between the 15th and the 17th century, before classical mechanics was formulated as a coherent and comprehensive mechanical theory in the sequel of Newton's work. The investigation of problems that were isolated from each other at the time but cohered into some kind of stable broad intellectual framework characterizes pre-classical mechanics. The second section is dedicated to specific case studies that present the application of a pre-classical framework to determined problems and to the investigation of specific natural phenomena. It consists of five case studies that illustrate in detail a reconstruction of pre-classical mechanics in particular constellations. Early modern theoretical, technical and social contexts transformed ancient and medieval mechanical knowledge in the course of its transmission. von Feldhay, Rivka und Valleriani, Matteo und Schemmel, Matthias und Renn, Jürge

Jürgen Renn is managing director at the Max Planck Institute for the History of Science in Berlin. His research focuses on structural changes in systems of knowledge with the aim to develop a theoretical understanding of knowledge evolution, taking into account its epistemic, social, and material dimensions. He is current Chair of the Humanities Section of the Max Plank Society. Matthias Schemmel is a research scholar at the Max Planck Institute for the History of Science in Berlin. He is interested in the global, long-term development of fundamental concepts in science, such as space and time, which he studies with the aim to address questions of epistemology. His historical research focuses on early modern mechanics, modern physics and astronomy, and Chinese science. Among his publications are the books The English Galileo: Thomas Harriot's Work on Motion as an Example of Preclassical Mechanics (Springer 2008) and Historical Epistemology of Space: From Primate Cognition to Spacetime Physics (Springer 2016). Matteo Valleriani is research group leader of Department I at the Max Planck Institute for the History of Science. He investigates the relation between diffusion processes of scientific knowledge, practical, and technological knowledge as well as their economic and political preconditions. In particular, his research focuses on the Hellenistic period, the late Middle Ages and the early modern period. Among his principal research endeavors, Matteo Valleriani, leads the project "The Sphere. Knowledge System Evolution and the Shared Scientific Identity of Europe" (https://sphaera.mpiwg-berlin.mpg.de), which investigates the formation and evolution of the shared scientific identity in Europe between the 13th and the 17th centuries. Among other publications, Matteo Valleriani is author of the book Galileo Engineer (Springer Dordrecht 2010) and Editor of The Structures of Practical Knowledge (Springer Dordrecht 2017).