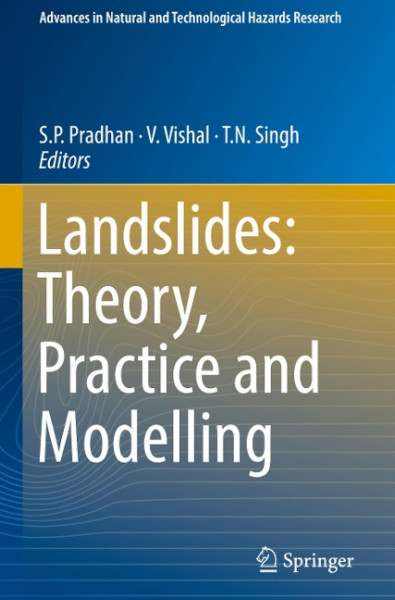 This book, with contributions from international landslide experts, presents in-depth knowledge of theories, practices, and modern numerical techniques for landslide analysis. Landslides are a reoccurring problem across the world and need to be properly studied for their mitigation and control. Due to increased natural and anthropogenic activities, chances of landslide occurrence and associated hazards have increased. The book focuses on landslide dynamics, mechanisms and processes along with hazard mitigation using geo-engineering, structural, geophysical and numerical tools. The book contains a wealth of the latest information on all aspects of theory, practices and modelling tools and techniques involved in prediction, prevention, monitoring, mitigation and risk analysis of landslide hazards. This book will bring the reader up to date on the latest trends in landslide studies and will help planners, engineers, scientists and researchers working on landslide engineering. von Pradhan, S. P. und Vishal, V. und Singh, T. N.

Sarada Prasad Pradhan is currently working as an Assistant Professor at the Indian Institute of Technology (IIT) Roorkee, India. He obtained his M.Sc. (Applied Geology) and Ph.D. from the IIT Bombay (India). He subsequently worked as a Reservoir Engineer for the Oil and Natural Gas Corporation Ltd. (ONGC) for five years, during which he was involved in many projects of national importance. He received the Young Scientist Award from CAFET INNOVA Technical Society, and the Asset Manager Award for his excellent performance in Gas Field Development from ONGC Ltd. His research findings have been published in leading national and international journals, book chapters and conference proceedings. His major research interests are Rock Mechanics, Engineering Geology, Reservoir Geo-mechanics, Petroleum Geo-science and Carbon Dioxide Sequestration, and he is currently participating in three major research projects on slope stability.Vikram Vishal is an Assistant Professor at the Department of Earth Sciences, IIT Bombay, Mumbai. He completed his Bachelor's degree at Presidency College, Kolkata and his Master's degree at the IIT Bombay. After a brief stint as a geologist at Tata Steel, he pursued his Ph.D. degree from 2010 to 2012, jointly at the IIT Bombay and Monash University (Australia). He worked as DST Inspire Faculty at the Department of Earth Sciences, Indian Institute of Technology (IIT) Roorkee from 2013 to 2015, then went on to pursue further research as a Fulbright-Nehru Postdoctoral Fellow at Stanford University, California, USA in 2015. He is a recipient of the National Geosciences Award - Young Researcher by the Government of India, the Young Scientist Award by the Indian Science Congress Association, the Excellence in PhD Thesis Award by the IIT Bombay and Monash University, and the Best Undergraduate Gold Medal by Presidency College, Kolkata. He has produced more than 40 publications on various aspects of geomechanics, engineering geology and unconventional petrophysics in journals, book chapters and conference proceedings. Recently, he co-edited the book "Geologic Carbon Sequestration: Understanding Reservoir Concepts" for Springer. He also serves as an Associate Editor for the Journal of Natural Gas Science and Engineering (Elsevier), and is currently investigating three research projects funded by the Ministry of Science and Technology, Govt. of India. Trilok Nath Singh is the Institute Geoscience Chair Professor at the Department of Earth Sciences, IIT Bombay, Mumbai, and an expert in the fields of rock mechanics, mining geology, and clean energy. He received his Ph.D. from the Institute of Technology BHU, Varanasi, in 1991, where he subsequently worked until 2003. He has been honored with many prestigious awards such as the National Mineral Award, the first P. N. Bose Mineral Award, the SEAGATE Excellence Award for Geo-Engineering, and the GSI Sesquicentennial Commemorative Award. He has nearly 28 years of experience in research and education, and has authored more than 350 publications in various journals and for national and international conferences. He serves on the governing and advisory councils of several national institutes and universities and is currently leading projects of immense scientific and industrial importance on e.g. coalbed methane, carbon sequestration, shale gas, nuclear waste repositories, and mine slope stability.