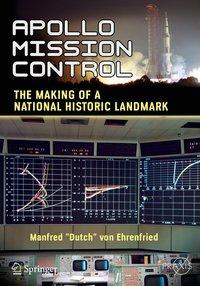 Apollo Mission Control
The Making of a National Historic Landmark

This book describes the history of this now iconic room which represents America's space program during the Gemini, Apollo, Skylab, Apollo-Soyuz and early Space Shuttle eras. It is now a National Historic Landmark and is being restored to a level which represents the day the flight control teams walked out after the last lunar landing missions. The book is dedicated to the estimated 3,000 men and women who supported the flights and tells the story from their perspective. It describes the rooms of people supporting this control center; those rooms of engineers, analysts and scientists most people never knew about. Some called it a "shrine" and some called it a "cathedral." Now it will be restored to its former glory and soon thousands will be able to view the place where America flew to the moon. von Ehrenfried, Manfred von

Dutch Von Ehrenfried has worked in both the spaceflight and aviation fields for about 25 years. He was a NASA Flight Controller in Mission Control for many Mercury, Gemini and Apollo Missions. Dutch also worked on some of the Apollo Lunar Experiment Packages from an operations point of view as well as experiments that went into Skylab from an Earth Resources Program perspective. He later worked in the NASA Headquarters Space Station Task Force and the Program Office as a contractor for about 10 years, and the FAA Aviation Safety Office for a year. In recent years, he has written several books in the Springer-Praxis series.