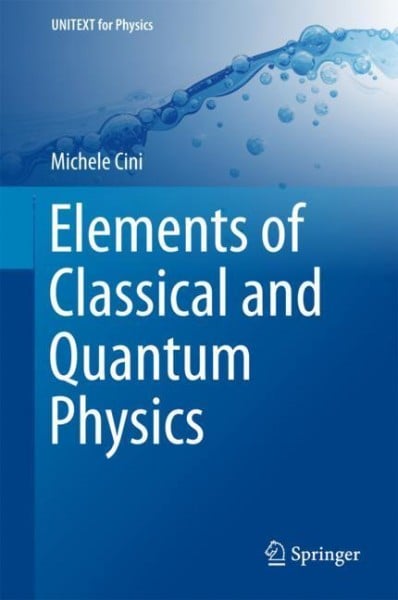 Elements of Classical and Quantum Physics

Elements of Classical and Quantum Physics

This book presents the basic elements of theoretical physics in a highly accessible, captivating way for university students in the third year of a degree in physics. It covers analytical mechanics, thermodynamics and statistical physics, special and general relativity and non-relativistic quantum theory, fully developing the necessary mathematical methods beyond standard calculus. The central theme is scientific curiosity and the main focus is on the experimental meaning of all quantities and equations. Several recent verifications of General Relativity are presented, with emphasis on the physical effects - why they were predicted to exist and what signals they were seen to produce. Similarly, the basic reasons why superconductors have zero resistance and are perfect diamagnets are pinpointed. Quantum Eraser Experiments and Delayed Choice Experiments are described. Many statements of Quantum Theory are a challenge to common sense and some crucial predictions have often been considered hard to believe and have been tested experimentally. The book examines the EPR paradox, Bell states and teleportation.To show the beauty and richness of the subject, various topics from different areas of Physics are covered. These include: discrete quantum models and lattices (periodic and not), Casimir effect, Anyons, Fano Resonances, the Hanbury Brown and Twiss effect, the Aharonov-Bohm effect, the Meitner-Auger effect, Squeezed Light, the Rabi model, neutrino oscillations, aspects of Quantum Transport, Quantum Pumping, and Berry phases, black holes and cosmological problems. von Cini, Michele

Michele Cini is Full Professor in Physics at the University of Rome 'Tor Vergata', Italy, since 2000, having joined the university in 1988 as Associate Professor. Dr. Cini graduated in Physics cum laude from Pisa University in 1969. After a period as a research worker in the ENI group, he joined the National Research Council (CNR), "Instituto di Metodologie Avanzate Inorganiche", and was responsible for delivering two official courses for the degree in Physics at the University of L' Aquila. Dr. Cini has been the coordinator of two European ESPRIT projects and the prestigious Italian 'prin' project on Auger spectroscopy of magnetic systems of low dimensionality. He has also been a member of the scientific boards for various conferences. He has authored or co-authored about 150 papers as well as some previous Springer books.