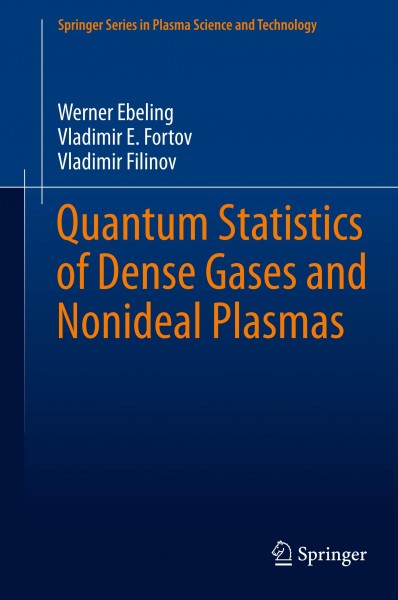 The aim of this book is the pedagogical exploration of the basic principles of quantum-statistical thermodynamics as applied to various states of matter - ranging from rare gases to astrophysical matter with high-energy density. The reader will learn in this work that thermodynamics and quantum statistics are still the concepts on which even the most advanced research is operating - despite of a flood of modern concepts, classical entities like temperature, pressure, energy and entropy are shown to remain fundamental.The physics of gases, plasmas and high-energy density matter is still a growing field and even though solids and liquids dominate our daily life, more than 99 percent of the visible Universe is in the state of gases and plasmas and the overwhelming part of matter exists at extreme conditions connected with very large energy densities, such as in the interior of stars.This text, combining material from lectures and advanced seminars given by the authors over many decades, is a must-have introduction and reference for both newcomers and seasoned researchers alike. von Ebeling, Werner und Fortov, Vladimir E. und Filinov, Vladimir

Werner Ebeling is a professor emeritus of the Humboldt University zu Berlin, where he was chair of statistical physics and nonlinear dynamics from 1979 to 2001. He is recipient of the Leibniz medal (1977), the Onsager medal (1978) and of the Humboldt-Mutis research award (1997). He holds honorary doctorate degrees from the University of Saratov (2001), the Technical University of Moscow (2001) and of the University of Moscow (2004). Vladimir Fortov is one of Russia's leading physicists, a senior member of the Academy of Sciences - and, since mid.2013, its president - and a world expert on the topic of matter under extreme conditions. He has carried out many pioneering experiments, among others experimentally confirming the "plasma phase transitions" long predicted by eminent scientists such as Eugene Wigner, Lev Landau and Klaus von Klitzing. He was also in charge of experiments carried out aboard the MIR and ISS space stations. He has published the book Extreme States of Matter with Springer in 2011. Vladimir Filinov is a professor of physics and head of the research group at the Joint Institute for High Temperatures of the Russian Academy of Sciences in Moscow.