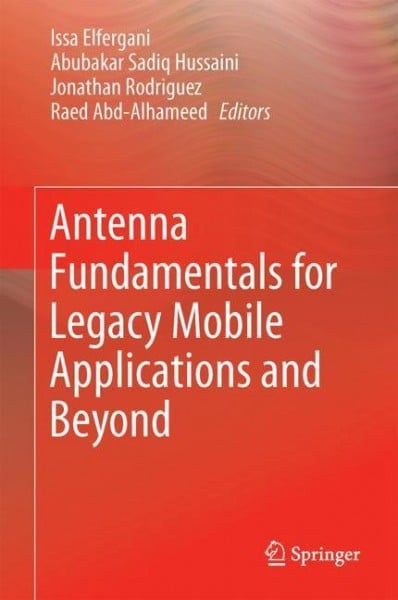 Antenna Fundamentals for Legacy Mobile Applications and Beyond

Antenna Fundamentals for Legacy Mobile Applications and Beyond

This book highlights technology trends and challenges that trace the evolution of antenna design, starting from 3rd generation phones and moving towards the latest release of LTE-A. The authors explore how the simple monopole and whip antenna from the GSM years have evolved towards what we have today, an antenna design that is compact, multi-band in nature and caters to multiple elements on the same patch to provide high throughput connectivity. The scope of the book targets a broad range of subjects, including the microstrip antenna, PIFA antenna, and the monopole antenna to be used for different applications over three different mobile generations. Beyond that, the authors take a step into the future and look at antenna requirements for 5G communications, which already has the 5G drive in place with prominent scenarios and use-cases emerging. They examine these, and put in place the challenges that lie ahead for antenna design, particularly in mm-Wave design. The book provides a reference for practicing engineers and under/post graduate students working in this field. von Elfergani, Issa und Hussaini, Abubakar Sadiq und Rodriguez, Jonathan und Abd-Alhameed, Rae

Jonathan Rodriguez received his Master's degree in Electronic and Electrical Engineering and Ph.D from the University of Surrey (UK), in 1998 and 2004 respectively. In 2005, he became a researcher at the Instituto de Telecomunicacoes (IT) - Portugal where he was a member of the Wireless Communications Scientific Area. In 2008, he became a Senior Researcher where he established the 4TELL Research Group (http://www.av.it.pt/4TELL/) targeting next generation mobile networks with key interests on green communications, cooperation, and electronic circuit design. He has served as project coordinator for major international research projects that includes Eureka LOOP and FP7 C2POWER, whilst serving as technical manager for FP7 COGEU and FP7 SALUS. Since 2009, he became an Invited Assistant Professor at the University of Aveiro (Portugal), and Associate in 2015. He is author of more than 300 scientific works, that includes 6 book editorials. His professional affiliations include: Senior Member of the IEEE and Chartered Engineer (CEng) since 2013, and Fellow of the IET (2015). Raed A. Abd-Alhameed is Professor of Electromagnetic and Radio Frequency Engineering at the University of Bradford, UK. He received the B.Sc. and M.Sc. degrees from Basrah University, in 1982 and 1985 respectively, and the Ph.D. degree from the University of Bradford, UK, in 1997, all in electrical engineering. He has long years' research experience over 25 years in the areas of Radio Frequency, antennas and electromagnetic computational techniques, and has published over 500 academic journal and conference papers; in addition he is co-author of three books and several book chapters. He is the senior academic responsible for electromagnetics research in the communications research group, in which a new antenna design configurations and computational techniques have been developed including several patents were considered and filed. Jointly with Prof. Excell (now he is the Dean of Engineering School in Wrexham University), he has developed the principle of the 'hybrid' method for electromagnetic field computation, which is able to combine the most appropriate method for differing regions of a problem (e.g. the human head and a mobile telephone). This method is recognized as being a leading area of research in Bioelectromagnetic field computation. He also investigates the reduction of the size of antennas for personal mobile communications. The development of this kind of antenna is under active investigation (three patent applications submitted). He has also developed the mathematical tools needed for the simulation of non-linear circuits, including energy-storing devices. Moreover, He has written three different programs for electromagnetic scattering problems (Wire Antenna design; Dielectrically-loaded antennas and Microstrip Wire antennas) and one code for analysis of nonlinear circuits using Volterra series. Interest has been shown by publishing houses in finding ways of disseminating this work. Issa Elfergani received his B.Sc. degree in Electrical and Electronic from The High and Intermediate Centre for Comprehensive Professional (Libya) in 2002 and his MSc, and PhD in Electrical Engineering with Power Electronics (EEPE) from University of Bradford (UK) in 2008 and 2012, with a specialization in Tunable Antenna design for mobile handset and UWB applications as well as Tunable Filters. He is now a Senior Researcher at the Instituto de Telecomunicações - Aveiro (Portugal), working with European research funded projects. He is a TPC member and reviewer for APACE, ISWTA and IEEE international conferences. He is the author of several journal and conference publications. His research interests include Tunable filter design and tunable antennas for current and beyond3G systems with specific emphasis on efficiency, high-Q factor, and miniature. Abubakar Sadiq Hussaini received his Diploma in Electrical/Electronic Engineering from the Bayero University (Nigeria) in 2003 with a specialization in Microwave/RF power amplifiers design and Tunable Filters. He carried out his MSc in Radio Frequency Communication Engineering and his PhD in Telecommunications Engineering from University of Bradford in 2007 and 2012, respectively. He is a member of the IEEE, IET, Optical Society of America; and authors of over 50 scientific works on electronic devices. His research interests include RF design, MEMS Tunable Filters and antennas.