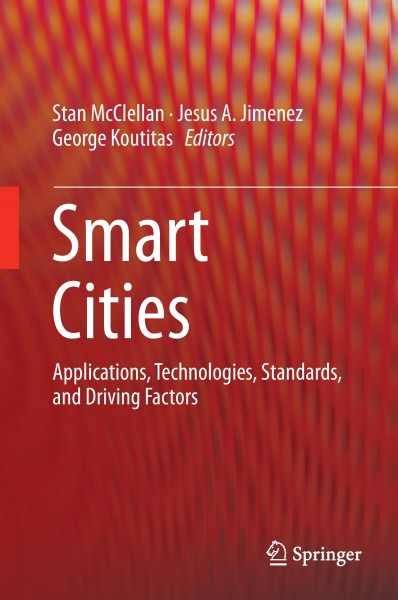 This book reviews the applications, technologies, standards, and other issues related to Smart Cities. The book is divided into broad topical sections including Vision & Reality, Technologies & Standards, Transportation Considerations, and Infrastructure & Environment. In these sections, authors who are experts in their fields present essential aspects of applications, technologies, requirements, and best-practices. In all cases, the authors have direct, substantive experience with the subject and present an important viewpoint driven by industry or governmental interests; the authors have each participated in the development and/or deployment of constituent technologies, standards, and applications, and share unique perspectives on key areas of the Smart City. von Mcclellan, Stan und Koutitas, George und Jimenez, Jesus A.

Professor Stan McClellan is the Director of the Ingram School of Engineering at Texas State University, where he is a Professor of Electrical Engineering and researches advanced communication & networking technologies. Dr. McClellan has held notable positions in the commercial, military/aerospace, and academic industries, including Hewlett Packard, ZNYX Networks, SBE, Inc., General Dynamics, LTV Aerospace, and Rockwell International. He served as chief technologist, chief architect, or lead engineer for several distributed real-time systems, developing technologies including real-time interactive telepathology, highly available systems for telecommunications networks, real-time flight simulators using reconnaissance imagery, and a flight-worthy digital terrain system for the AFTI/F-16 testbed aircraft. He has also served as a technology & business consultant for commercial entities including BellSouth, Motorola, Cisco, 3Com, Newbridge/Alcatel, BNR/Nortel, Network Equipment Technologies (NET), MCI/Worldcom, LSU Medical Center, and others. Most recently, Dr. McClellan was a founder and Chief Technology Officer for a startup company in the Smart Grid space, where he developed a revolutionary approach to Smart Grid systems using advanced signal processing, on-wire communications, and a sophisticated system architecture incorporating endpoint mobility, autonomous device registration, and command/control capability. As the author of numerous peer-reviewed technical publications and US/international patents, Dr. McClellan is an expert in networking and distributed system optimization, particularly for voice/video transport with quality of service constraints (QoS). He has made invited contributions to well-known references including Advances in Computers, The IEEE/CRC Electrical Engineering Handbook, and The Encyclopedias of Electrical & Electronics Engineering. Dr. Jesus Jimenez is an Associate Professor in the Ingram School of Engineering at Texas State University, San Marcos, Texas. Dr. Jimenez received his Ph.D. in Industrial Engineering from Arizona State University, Tempe, Arizona in 2006. He has research interests in sustainable production systems and supply chains, as well as in data-intensive analysis and simulation, and in modeling and analysis of manufacturing systems. Due to his emphasis in applied research, Dr. Jimenez has collaborations with several manufacturing companies. His research has been funded by state and federal agencies, such as the US Department of Agriculture, the US Department of Education, and Texas SECO, as well as by companies such as 3M, Lanner Group, SEMATECH, and Simio. Dr. Jimenez has more than 20 publications, including journal papers and conference articles. His research has been published in the IEEE Transactions on Automation Science and Engineering, IEEE Transactions on Semiconductor Manufacturing, International Journal of Production Research, and the Winter Simulation Conference Proceedings, among others. Dr. George Koutitas George Koutitas is an academic and entrepreneur in Wireless Networks and Smart Grids. He received the B.Sc. degree in Physics from Aristotle University of Thessaloniki Greece, 2002 and the M.Sc. degree (with distinction) in Mobile and Satellite Communications from the University of Surrey UK, 2003. During his studies, he received the "Nokia Prize" and "Advisory Board Prize" 2003 for the best overall performance and best MSc Thesis. He defended his Ph.D. in radio channel modeling at the Centre for Communications Systems Research (CCSR) of the University of Surrey in2007 under a full scholarship (EPSRC). His main research interests are in the area of Wireless Communications (modeling and optimization), Energy Efficient Networking and Smart Grids. He is involved in research activities concerning energy efficient network deployments and design, Green IT and sensor networks/actuators for smart grid applications. He is also the founder of Gridmates, a Transactive Energy Platform designed to end energy poverty. Currently, he is a postdoc researcher at the University of Thessaly (Dept. Computer Engineering and Telecommunications) and a visiting professor at Texas State University.