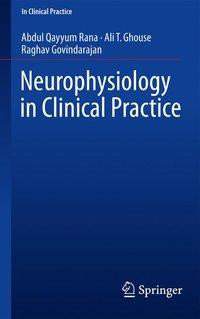 This handbook provides a concise up to date review in interpreting electroencephalography and electromyography using simple illustrations. The book has been divided into two sections. Section 1 describes electroencephalography and Section 2 discusses electromyography and nerve conduction studies. Each chapter has been carefully drafted to provide the most up to date accurate information in an easy to understand format interspersed with diagrams and tables where needed. This book is aimed at trainees doing their neurophysiology rotation, general neurologists, general practitioners, advanced practice providers and neurophysiology technicians. von Rana, Abdul Qayyum

Abdul Qayyum RanaDr. Rana is a Canadian neurologist who specializes in Parkinson's disease and movement disorders. He is currently the Director of Parkinson's Clinic of Eastern Toronto and Movement Disorders Centre, Toronto, Canada. He is a Fellow of the Royal College of Physicians and Surgeons of Canada. He is the founder of World Parkinson's Program. He is also the founding editor of the Journal of Parkinsonism and RLS and has published extensively in the field of Parkinson's disease and Movement disorders. He has been honored with numerous awards including an honorary FRCP from the Royal College of Physicians, UK and Wayne Hening Award.He is author of several Springer books, including Neurological Emergencies in Clinical Practice, Neuroradiology in Clinical Practice, Differential Diagnosis of Movement Disorders in Clinical Practice and Essential Tremor in Clinical Practice. Ali T. GhouseDr Ghouse is currently a Clinical Associate Professor of Medicine at McMaster University and Consultant at Hamilton General & Juravinski Hospitals, Hamilton, Ontario, Canada. His areas of interest are electromyography and impairment and disability evaluations.He is a member of the Canadian Medical Association, and a Fellow of the Royal College of Physicians and Surgeons of Canada, American Association of Neuromuscular & Electrodiagnostic Medicine and American Association of Physical Medicine and Rehabilitation. Raghav GovindarajanDr Raghav Govindarajan gained his medical degree from Bangalore Medical College, India, where he also completed his rotating internship. He then moved to Cleveland Clinic, Florida, USA for his internship and neurology residency, before undertaking a neuromuscular fellowship at Washington University in St. Louis. He is now Assistant Professor in the Department of Neurology at University of Missouri, Columbia, MO, USA. Dr Govindarajan is an active member of AAN and received the AANEM President's Research Award in 2014 and 2015.