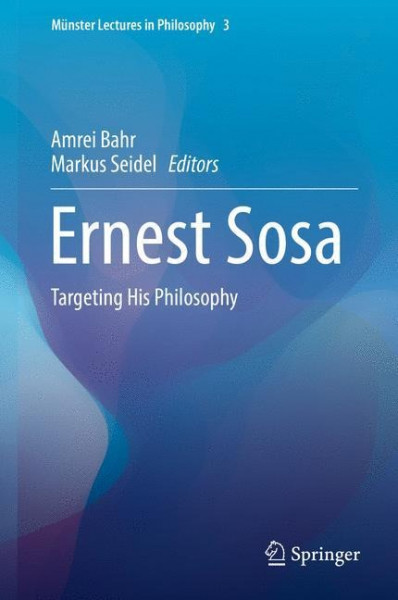 This volume provides the reader with exclusive insights into Ernest Sosa's latest ideas as well as main aspects of his philosophical work of the last 50 years. Ernest Sosa, one of the most distinguished contemporary philosophers, is best known for his ground-breaking work in epistemology, and has also contributed greatly to metaphysics, metaphilosophy and philosophy of language.This book, resulting from the 18th Münster Lectures in Philosophy, includes an original article by Sosa on his most recent work in epistemology, and seven critical papers that target a wide range of topics from Sosa's oeuvre, as well as Sosa's responses. As regards his epistemology, the issues discussed include his solution of the sceptical problem in his most recent work and the question of how to integrate a sensible account of testimony to Sosa's virtue epistemology. The selected topics from his other fields of inquiry include his view on empirical challenges to human rationality, his defense of the scientific status of philosophy, his concept of causality as considered against the background of the current debate, his suggestion of a middle-way between existential relativism and absolutism and his externalistic internalism in the philosophy of mind and language. von Bahr, Amrei und Seidel, Markus

Markus Seidel is a Postdoctoral Researcher and Lecturer at the Center for Philosophy of Science at the University of Münster, Germany. His research focuses on general philosophy of science and epistemology. Besides several articles in these areas he is the author of the book Epistemic Relativism. A Constructive Critique (Palgrave Macmillan, 2014). Amrei Bahr is a researcher and a lecturer at the Department of Philosophy of the University of Münster. Her main field of study is the philosophy of artifacts, with special focus on artifact copies and artifact functions.